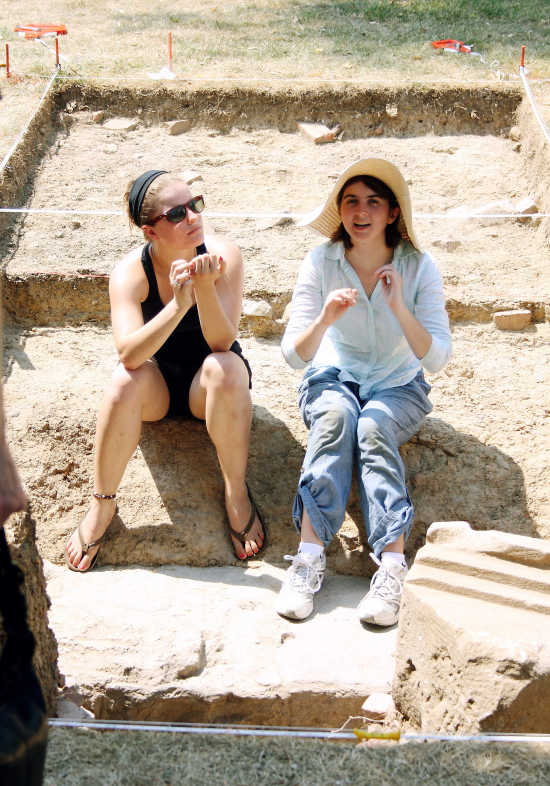 A final "Trench Talk" Friday detailed the findings of an archaeological dig at the site of old Minshall Lab on the grassy area immediately west of the DePauw University Union Building. Assisting in the effort have been two student volunteers, Kat Raymond-Judy (in bonnet) and Danica Andersen, a pair of sophomores from Minnesota.

With temperatures literally 100 degrees in the shade at noon Friday in Greencastle, members of the archaeological dig team unearthing the remnants of Minshall Lab might have thought they were in Greece or Turkey or amid the shifting sands of Egypt instead of the middle of the DePauw University campus.

Yet the heat and humidity couldn't temper the excitement of members of the team that's been working in the shadow of the DePauw Union Building since June 11.

"I loved it," Schindler said of her first dig on American soil.

What's different from her normal remote digs in some faraway land is that "here you have a community that's invested in what you're doing," Schindler said. "They have stories to share, and I don't usually get that in my real job."

Surrounding the trench are piles of recovered bricks and mortar and other relics.

The local dig, she said, was able to "combine archaeology with personal narrative and recollections."

The team reached one of its goals, uncovering part of the south wall of the old science building that was leveled in 1973. And the digging stopped Wednesday when the crew found the packed-earth basement of Minshall.

"Finding metal and chunks of brick and tile was OK," Andersen said, "but finding actual useful items like a light bulb and a two-liter acid jar was really interesting."

Raymond-Judy agreed. "Partly it's about looking for the cool things but also Danica and are getting to learn about archaeology as well."

The two students enjoyed the experience so much they even joked about coming back next year to explore the old Bowman Gym site. "There's a swimming pool under there (Bowman Park) somewhere," Andersen said.

The diggers also discovered a disintegrating green window shade, that Andersen admittedly "got sick of digging out" in its decaying state.

Interestingly, one of the more significant finds, they said, was a Pepsi can -- or more importantly, a 75th anniversary Pepsi can. What's valuable about that find is it gave the team a precise date to work with: 1973.

"We can use this as a 'terminus post quem' which means that we can know from this exact date that everything above the layer the can is in must be from 1973 or later," Raymond-Judy and Andersen said in their blog (which can be read at digdepauw-minshall.blogspot.com/).

"This confirmed the information we got from the archives that said the building was destroyed in 1973. It was a very exciting find for us. We are glad that some thirsty person decided to throw this can in among the bricks."

A significant piece of the building structure uncovered in the dig was a chunk of limestone from atop the gables of the Minshall roof. Its distinctive grooved pattern allowed the team to find it in archive photos.

"This thing came crashing down three stories from the top of that building to land here (in the basement)," Raymond-Judy said.

Several piles of brick, including some unbroken examples, lined the trench site as the students spoke. One pile had 143 pieces, it was noted.

Schindler noted that it is possible some of the recovered brick might be incorporated in some way into the design of the new dining hall that is scheduled to be built on the site west of the Union Building along the north side of Hanna Street.

Another possibility is a display of artifacts in the Julian Science and Math Center, which was built to replace and upgrade the offerings of Minshall Lab.

As for the small trench -- two meters wide, four meters long and just under four feet deep at its maximum -- all the digging of the past three weeks will be history when it is filled back up in the near future.

Yet the team will have cherished memories of an interesting summer project, despite not finding any gems, jewels or rare coins.

Raymond-Judy even incorporated into her experience a little prank at the expense of her grandfather, retired former longtime DePauw Professor Ralph Raymond.

"My grandfather made a joke about how he had lost a silver dollar by Minshall Lab, and wanted us to look for it," Raymond-Judy laughed.

So she went to the antique store and bought a silver dollar for $2, brought it back to the dig site and covered it with dirt to make it look like it had just been unearthed.

"I expressed mailed it to him," she smiled.

"I forgot to include a note telling him, 'Archaeology is amazing. We found your silver dollar for you.'"

You have to dig that.