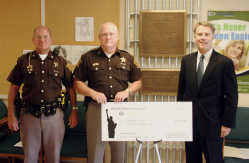 The Putnam County Sheriff's Department receives a check for $31,551 from U.S. Attorney Joe Hogsett (right), drug money that was seized in a traffic stop on Interstate 70 in March 2011. Accepting the check are (from left) Chief Deputy Tom Helmer and Sheriff Steve Fenwick.

The Putnam County Sheriff's Department was presented with a $31,551 check from U.S. Attorney Joseph Hogsett on this week, money that was seized during a drug arrest in March 2011.

A traffic stop on I-70, part of a collaborative investigation conducted by the Drug Enforcement Administration and PCSD, turned up the cash.

"My job is to thank the Putnam County Sheriff's Department for their good work," Hogsett said Tuesday. "You (the taxpayers) are getting better law enforcement and taxpayers aren't paying for it, the drug dealers are."

As the money went unclaimed, typical with drug seizures, it was secured, reviewed by the United States Congress and processed.

Eighty percent of the money was then returned to the arresting department, PCSD.

Sheriff Steve Fenwick said he was unsure just how the money would be spent, but suggested one option would be to purchase a new car for the department.

Hogsett said he trusts PCSD to put the money to good use. He also called the program a "win-win-win."

Those three victories, he said, are taking drug profits from dealers, giving the money to a local department, and funding better law enforcement without taxpayer money.

"These complex federal prosecutions are a true team effort, and they wouldn't be possible without the cooperation of Sheriff Fenwick and his deputies," Hogsett said in a press release. "I thank them for their service, and a I look forward to more of these presentations in the coming years."