Born Nov. 10, 1945 in Marion County, she was the daughter of William Herman and Lola Ruby (Taylor) Green and attended Washington High School in Indianapolis. 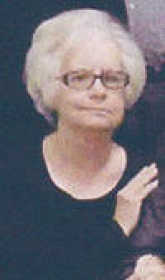 Sue had been a homemaker and worked with her husband to establish and operate the Track Ministry throughout Indiana and five overseas nations, serving missionaries worldwide.

Sue co-authored the book, "Little is Much When God is in It," going out to millions with worldwide publication.

Funeral services will be conducted at 1 p.m. Friday, Aug. 17 at Antioch Baptist Church with Pastor Ron Knapp officiating. Burial will follow at the Brick Chapel Cemetery.

Memorial contributions may be made in memory to support the Track Ministry c/o Antioch Baptist Church, 3988 S. CR 300 West, Greencastle, IN 46135.