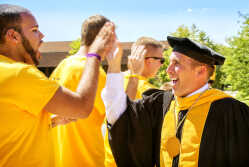 Celebrating its 175th anniversary, DePauw University welcomed more than 600 new students to Greencastle this past weekend.

Classes for the 2012-13 academic year begin on Wednesday.

After spending Saturday unpacking and moving into residence halls, the students processed through campus, led by DePauw University's 19th president, Brian W. Casey, and were greeted by a cheering faculty at Kresge Auditorium in the Green Center for the Performing Arts.

"Here's the great secret of college --- the hidden clue," Casey told the Class of 2016 at the opening convocation. "You're not always expected to have it figured out right away. If you're open and brave about things, it all comes together."

The 617 students were selected from roughly 5,000 applications for admission and come from 47 states and 34 foreign countries.

Sixty-five scholars maintained straight "A" averages throughout their high school career. Twenty-seven members of the Class of 2016 were named either valedictorian or salutatorian of their high schools.

"There are few moments in life when before and after are so clearly visible to each other, separated by one moment," President Casey said. "You woke up this morning in a true before. And when you leave this hall -- in just a few minutes, really -- you will begin an amazing after.

"As you get older you will find yourself constructing the story of your life with certain signposts and touchstones, and you will reach back to certain days. Today is one of those days. The phrase 'when I went to college' has now entered your own personal story, the narrative of your life. That moment is right now. And everyone who has ever been so lucky to leave home to attend a college remembers this day, this moment."

President Casey urged the students to speak their minds and ask questions, and to get to know their professors.

Wielenberg, who chairs DePauw's philosophy department, was selected in the spring by last year's senior class to address the incoming class. The professor told the new students they are about to begin exercising their minds in new and different ways at "a gym for your mind."

"The people standing behind me on this stage are sort of like the freakish trainers at the gym," he said. "You can't see it, but some of them have huge science muscles; others have huge poetry muscles. We've got historians, biologists, anthropologists, psychologists, musicians -- artists and scholars of just about every kind you can imagine. We even have philosophers!

"Our job is to help you become intellectually ripped," he said. "In my 13 years here, I've seen it happen. I've seen students transformed."

DePauw senior Sara Scully, the student body president, told the Class of 2016, "Classes are small, so you will know your professors, and they will know you -- that's mostly good. Your classes are going to lead you to activities you didn't know existed.

She noted that 175 years of "history, culture and tradition have shaped our school."

"As a faithful watcher of ESPN, I love thinking about the fact that one of its founders, Bill Rasmussen, allowed his love for sports to grow while watching the traditional Monon Bell game here. Also as someone who grew up certain I was going to be an astronaut, until I was scared off by Tom Hanks in Apollo 13, I can't believe that on campus last semester I got to speak with Joseph P. Allen, a DePauw alum who logged 314 hours in space and piloted the space shuttle. These experiences are not unique to me; they are common to every DePauw student who takes advantage of what DePauw offers."

President Casey told the incoming class, "As shocking as it may seem, in just over 1,200 days from now, this class and this faculty and your family are going to gather again on this campus. But on that day -- your graduation day -- you'll be wearing robes too. And you're going to walk across a stage, to receive your college degree, and you will have in your head so many memories that you'll think you'll explode."

Dr. Casey concluded by saying he can't wait "to see how you are going to change us, and change the world."

The audience also heard from Pedar Foss, dean of academic life and associate professor of classical studies; Cindy Babington, vice president for student life and dean of students; and Marcus R. Veatch, a 1975 DePauw graduate and president of the university's Alumni Association.