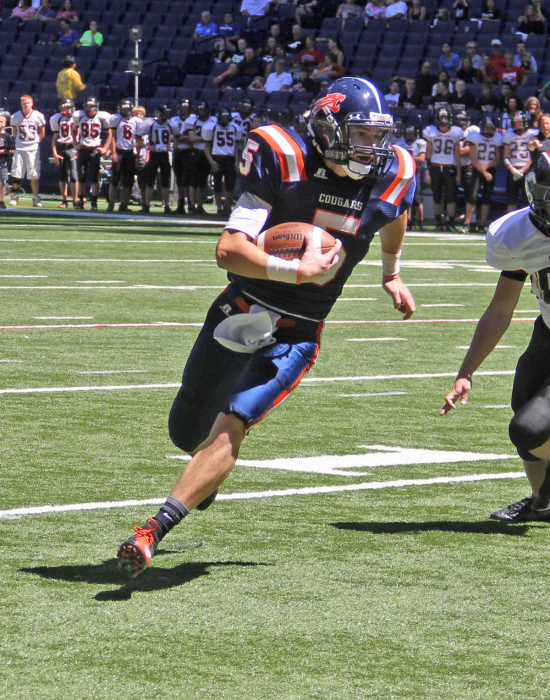 NEW MARKET -- North Putnam took a trip up U.S. 231 to New Market, looking to add on to its opening week win over Edgewood as they took on Southmont Friday night.

After being tied at 14-all through halftime and taking an early 21-14 lead in the third quarter, the Cougars were unable to stop a Mountie rushing attack that amassed 369 yards en route to a 44-21 win.

After both teams started off with deep drives that stalled, the hosts opened the scoring with an eight-play, 64-yard drive, capped by a three yard run by quarterback Devon Burton for a 6-0 lead.

The Cougars found their way to the endzone one minute later.

It took a bit of luck for Austin Day's pass to make it to Jameson Brewer, but Brewer did most of the leg work in gaining 63 yards to the Southmont one-yard line.

Two plays later, Kaleb Belcher took a sweep to the left and ran in from three-yards out to give the Cougars a 7-6 lead after the extra point.

Southmont turned the ball over on downs in Cougar territory on its next possession but after briefly moving into home territory, North Putnam quick kicked on third and 24.

But Southmont immediately gave the ball back after a pitch to Dan Barrett hit the turf and Jake Haste recovered.

On the next play, Trevor Smith lobbed a pass to Brewer, who went up and came down with a 19-yard touchdown reception.

Trailing 14-6, Southmont responded with an eight-play drive that covered 52 yards and ended with a sweep by Barrett on fourth and inches for a five-yard touchdown run.

Patrick Myers dove in for the two-point conversion to tie the scores at 14-14 going into halftime.

The Cougars wasted little time in reclaiming the lead to start the third quarter of play.

Day rattled off a 43-yard run on the first play of the second half and five plays later, Smith snuck in from a yard out to put the visitors ahead 21-14.

North Putnam looked to have taken the game's momentum over four plays after the score when they recovered a Burton fumble.

But the drive stalled four plays later and the Mounties continued a vicious ground attack to take the lead.

After three straight carries by Myers, Southmont sent Barrett on a sweep to the right and 35-yards later the Mountie senior hit paydirt.

Myers added the two point conversion for a 22-21 lead.

Southmont scored a minute into the fourth quarter after seven play, 76-yard drive was capped off by a Barrett 15-yard run. The two-point play failed but the hosts led 28-21 with 11:09 to go in the game.

Southmont put the game away with five and a half minutes to go in the game.

After the Cougars lost possession on downs in Mountie territory, the hosts needed five plays before Burton took off on a 45-yard run to the end zone and with a Myers two point conversion, extended the lead to 36-21.

The ensuing Southmont kickoff was an onside kick that the hosts recovered and on the drive that followed the Mounties whittled the clock down to under a minute.

The Cougars tried to move down field but Burton ended the game with a 45-yard pick-six that gave the Mounties a 44-21 final advantage.

North Putnam head coach Greg Barrett said afterward the kicking game had a detrimental effect on the defense early on that carried over later.

"Our kicking game was atrocious. We've got to find a kicker that puts us in good field position because we didn't do our defense any justice and that's one thing I'll make sure we get better at," Barrett said.

"Between their fullback Meyers and their quarterback Burton, they put the wear and tear on us."

Through halftime, however, Barrett thought that the game was going in the right direction.

"I thought it was going great. We knew what to expect from Southmont. I don't think personally we were up to par. I don't think we were ready from the start," Barrett said.

"I thought our effort was good at times, but not good all the time. We've got a lot of young kids who've not played before and there is a lot of inexperience on the field."

After taking the lead in the second half, Barrett said that missing a chance to extend the lead turned the momentum over to Southmont as well as the game.

"We were in a position to keep the lead because you can't count Southmont out. Coach (Desson) Hannum does an awesome job with that triple option," Barrett said.

"Getting that first touchdown in the second half was great for our momentum and got a turnover but it killed us when we didn't get anything off of it.

"They got the momentum back and took off with some great plays. We'll take this one and get better daily at what we're doing. Take no credit away from Southmont; they did a great job and I respect what they do," Barrett added.

Barrett said aside from working on the kicking game, the squad just needed time to practice before the next game against Cascade.

"This team is a hard working group. They're passionate about football. They know how to win and they're just going to get better," Barrett said.

"We're going to learn from this and get better next week."