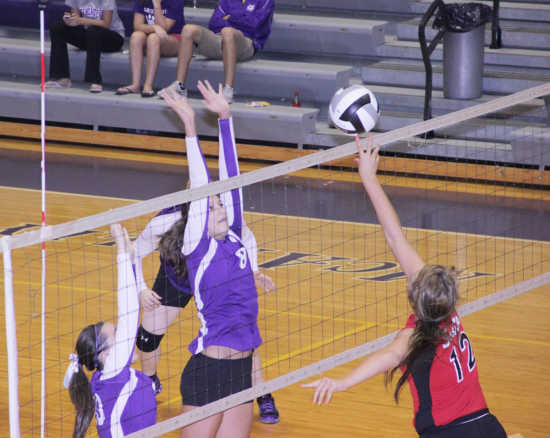 Greencastle's Quinci Miller (8) goes up for a block attempt on Terre Haute South's Maddie Callahan during Thursday's match. The Tiger Cubs fell to the Braves in three sets.

Although Greencastle volleyball dropped a hard-fought three set decision to Terre Haute South Thursday, the Tiger Cubs continue to show improvement and gave the Braves all they could handle. Greencastle lost the match 25-15, 25-20 and 25-14.

"I hope they don't give up because I'm not going to give up on them. We're just going to keep plugging away one match, one point and one serve at time," she said.

In the opening set, Greencastle battled Terre Haute South evenly with both teams trading points and ultimately knotting things up at 10-all. The Braves were able to get the upper hand, rattling off four points to create enough of a gap that would hold for the rest of the match, allowing the Braves to win 25-15.

For everything the Tiger Cubs did well in the first set, it escaped them at the start of the second set.

Greencastle watched as Terre Haute South raced out to a quick 11-0 lead, but that's when GHS got down to business. Greencastle began chipping away at the Braves' lead and clawed its way back into the match, pulling within four points at 14-10 and at 23-19 on a Rayleigh Amis kill.

However, the Braves scored the final two points, with Emma Burke delivering the game-winning kill to make it 25-20 in favor of the Braves.

Lowe was impressed with the effort her squad showed in the second set and how they were able to battle back from a significant deficit.

"First of all, we shouldn't have spotted them 11 points," Lowe said. "However, you get down 11-0, we didn't fold and that's typically something that we have done in the past. I'm super excited about that, so we're progressing and we have the potential to improve every single day."

In the final set, the two squads battled to a 6-all tie before Terre Haute South was able to put together runs of points that expanded its lead to 17-11. After a kill from Greencastle's Quinci Miller, the Braves scored six straight points to take a 23-12 lead.

Greencastle scored two points, before the Braves were able to score the match's final two points on a lift by Greencastle and a kill from Maddie Callahan to win the match for Terre Haute South 25-14.

The Greencastle junior varsity squad was able to pull out a three set victory over the Braves.