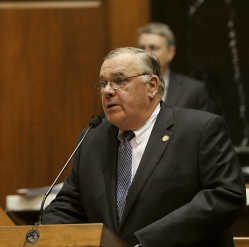 INDIANAPOLIS -- District 44 State Rep. Jim Baird joined 68 other Indiana House Republicans in being sworn in on Organization Day, which marks the first meeting for the 118th General Assembly.

All 100 members of the House, including 19 new Republicans and six new Democrats, were sworn in Tuesday by Chief Justice Brent Dickson.

State Rep. Baird (R-Greencastle) was re-elected to represent House District 44, which now includes all of Putnam County and portions of Clay, Morgan, Owen and Parke counties.

Rep. Baird has not yet received his new House committee assignments.

"I am deeply honored with the opportunity to once more represent our community in the General Assembly," Rep. Baird said.

"I strongly support the focus of the upcoming session," Baird added, "which is on financial security, job creation and strengthening education. Indiana is already a leader in private sector job growth but there are still veterans, students and individuals unable to find work. We must continue to reinforce our economy by working to pass a balanced budget and by creating incentives for small business owners -- our job creators."

In October, the House Republican Caucus released its legislative agenda, making it clear that its focus will be on financial integrity, jobs and education. That focus was echoed as the 69 House Republicans prepared for the upcoming session with a resolve to accomplish those priorities and continue to propel Indiana to be a state where Hoosiers have the ability to own their American Dream.

"Knowledge is the key to success for our state's future," Rep. Baird said. "We must continue to promote the highest quality education system while improving career and technical instruction in our schools. It is our duty to set Hoosier students up for success by providing them with training and the tools they need to accomplish their goals and create their own American Dream."

Newly re-elected Speaker of the House Brian C. Bosma presided over Organization Day at the House.

"Just like a responsible family, we will sit together at our desks on the House floor and in the committee rooms of this building -- and work through the monumental issues facing our state," Bosma (R-Indianapolis) said.