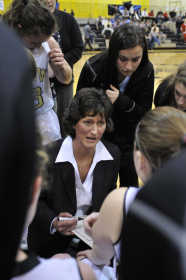 DePauw University's women's basketball head coach Kris Huffman has lad the Tigers for more than 20 years, led the team to a 2007 national championship and won more than 400 games.

When you're as successful as Kris Huffman has been as head coach of the DePauw University women's basketball team (the Tigers are ranked No. 1, have made nine consecutive NCAA tournaments and won 2007 national championship), recognition comes often.

Huffman has won four different national coach of the year awards and she learned recently she will be inducted into the Indiana Basketball Hall of Fame.

"It's truly an honor," Huffman said. "It still doesn't seem real, although I've been notified."

Huffman received a call recently from Donna Sullivan, a hall-of-fame coach herself, explaining that Huffman would be the 2013 Silver Medal Award recipient.

The Silver Medal Award is presented each year based on outstanding contributions to Indiana high school basketball.

Aside from offering many Indiana high school basketball players an opportunity to continue their careers at the college level, Huffman has had several former players go on to become high school coaches.

"Some of our best players have been Indiana born and bred," Huffman said. "To think that some of them have stayed in the profession is also very rewarding."

Huffman had another explanation for her honor.

"'They must not know I'm from Iowa' was one of my first reactions," Huffman said. "I think (IBHF) would want to take care of one of their own before they'd invite a guest, and I feel like I'm a guest in this state in many ways."

Huffman has been coaching at DePauw for more than 20 years, and also works as an assistant athletic director and part-time instructor for the school.

Huffman was elected to the Iowa Girls' Basketball Hall of Fame previously, but said being elected in Indiana is an entirely different honor.

"I think of the Iowa Hall of Fame and the induction was kind of from your high school athletic performance," she said. "And we had great teams and great coaches. I felt like I kind of carried the torch for the successful teams that we had.

"This one is maybe more special being in a state that kind of reveres basketball."

Along with Huffman, 10 other new members will be elected into the 12th Women's Induction Class on April 27.

Laura (Lori) Augustyniak, Leo, 1978: All-State as a senior at Leo High School, she went on to play at Northwestern University where she remains the record holder for career games played (122).

Nancy (Cowan) Eksten, Crown Point, 1984: Scored a then school-record 1,778 points and led her team to a state championship in 1984. Played one season at the University of Kentucky before finishing her eligibility at Indiana University.

Lisa Sanchez, East Chicago Roosevelt, 1980: Won a state title as a junior, then went on to become a three-time MVP at California Lutheran University.

Karen (Bauer) Stenftenagel, Jasper, 1979: Made the state finals in 1979, then became Ball State University's first woman to receive a full-ride athletic scholarship. She was inducted into the BSU hall of fame in 2000.