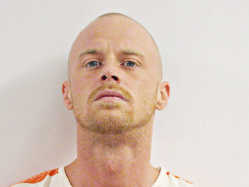 A Putnam County man, reportedly enraged that his 10-year-old stepson spilled sugar on the kitchen floor, is charged with confining the boy in a room without access to food, water or toilet facilities.

Michael Shane Witt, 33, made an initial appearance in Putnam Superior Court Wednesday, charged with neglect of a dependent, battery causing bodily injury and domestic battery as a result of a Dec. 29 incident at the 202 N. Main St., Cloverdale, home he shares with six children and stepchildren.

The probable cause affidavit in the case alleges Witt "did knowingly abandon or cruelly confine" the minor child in a room without sanitation in an "act of cruel or unusual confinement that deprived (the boy) of necessary food, water and sanitary facilities."

Judge Denny Bridges entered a not-guilty plea to each count for Witt and appointed Scott Adams as his public defender with a Feb. 6 pretrial conference set as the next juncture in the court process.

According to Cloverdale Police Sgt. Charles Hallam's incident report included in the probable cause affidavit, Witt himself called Putnam County Dispatch at 12:31 a.m. Saturday to report a disturbance. The incident was reportedly related to his wife being at the apartment when she is not allowed there by the landlord.

Witt asked police to remove his wife and the kids for "not respecting his house rules," court documents note.

"Mr. Witt indicated that the government already knows what he's doing as 'they' tape and listen to everything," Hallam's police report added.

Officer Hallam also reported that police have been called to the apartment residence numerous times in the past for "similar types of requests and Mr. Witt's similar behavior."

Mrs. Witt told police that Shane had poked the boy who spilled the sugar on top of his head and elbowed her in the head and face.

While interviewing the estranged wife, Officer Hallam noted a "strong odor of urine and feces" coming from a back bedroom area, and observed a closed door having a "rectangle cut out with an extension cord coming out of it."

After asking Mrs. Witt to open the door to what the Witts claimed was a play area for he children, Hallam discovered a stool in the middle of the roof with a circle cut out of the seat. It was positioned over a trash can fitted with a trash bag to collect human urine and feces.

"Oh, someone must be messing around and must have used the bathroom," Mrs. Witt told Hallam. "That's not what that is for. Just playing games I guess."

However, when the officer suggested he felt differently and suggested that the room was being used to punish the children, she lashed out at her husband.

"You see, Shane," the police report says she stated, "this is why you don't call the police. Thanks, now look at what you've done. They're going to take the kids away."

Police also talked to the youngster in question following the arrival of Department of Child Services (DCS) personnel. The boy told authorities Shane puts them in the back room for punishment.

"He locks the door on them and tells them not to come out or they will be in more trouble," the police report notes. "He further would not let them out to use the bathroom and made them use 'the bathroom' he made for them."

The 10-year-old said the children often would be "left in there for long periods of time" but was not specific on how much time was involved.

DCS officials said Shane referenced the room by saying it is "where they go when they are punished, and 'this is lock-up.'" He also said he only made the children stay in there for 15-20 minutes at a time.

Shane Witt was subsequently placed under arrest, Hallam said, at which time he "again elaborated that this was all a conspiracy" and the government was recording everything.

Witt was booked into the Putnam County Jail at 5 a.m. Saturday.

If found guilty of the three charges enumerated in court on Wednesday afternoon, Witt could face from 3-12 years in prison and be fined up to $25,000.

Neglect of a dependent is a Class C felony. Battery causing bodily injury is a Class D felony, while domestic battery is a Class A misdemeanor.

The children were reportedly placed in the custody of child protective services and taken to Brazil.