Senior Carter Lewis, 18, is a 170-pound wrestler for Greencastle High School. He is currently 26-5 this season after qualifying for the state finals last year. Lewis is a member of the Latin Club and the G Club at GHS. He was also an all-county linebacker for the Tiger Cubs football team. He has four younger siblings: Kaden Lewis (9), Charlie Bridges (9), Carmen Bridges (9) and Braxton Lewis (5). 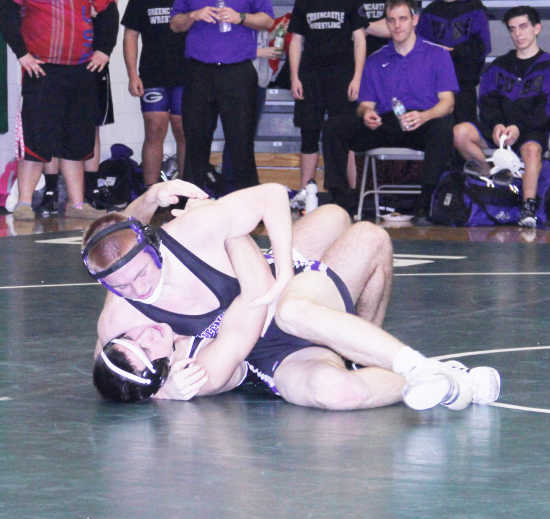 Banner Graphic: Who introduced you to wrestling and when?
Carter Lewis: Mr. (Russ) Hessler did when I was at TZ, so in third grade. I think I was 73 pounds, so it was 100 pounds ago.

BG: What is your training like?
CL: It's intense. We work hard here and we always try to keep the wrestling room as hot as possible so we're always sweating. I like to try to work in the off-season and wrestle some freestyle tournaments.

BG: Do you prefer wrestling or football?
CL: It depends what season I'm in. There's certain things I like about both. I like the brotherhood part about football, but I like to win and I like winning in wrestling. You get a lot more wins in wrestling.

BG: Who is your favorite athlete?
CL: I'd probably have to say Roddy White, the Falcons receiver. The Falcons are my team. In youth league, whenever we won the Super Bowl, we were the Falcons and that's when I started liking them. When Michael Vick was on there. He was a big role model for me for a while.

BG: Who inspires you?
CL: I would say my parents (Tracy and Denny Bridges, Kelly and Crystal Lewis). My parents have always pushed me in sports and told me I can do it; made me stick with it. They've always been a pretty big part.

BG: What have you learned from wrestling?
CL: Once you do something like wrestling, it teaches you stuff like discipline and time management. Another big thing is staying in shape. When you're watching your weight constantly, I feel like that will help me later in life to stay in shape and not get fat.

BG: What are your plans for after high school?
CL: To wrestle in college, hopefully. That's my goal. I'm talking to a few schools.