No. 1 Tigers rely on roles unspoken 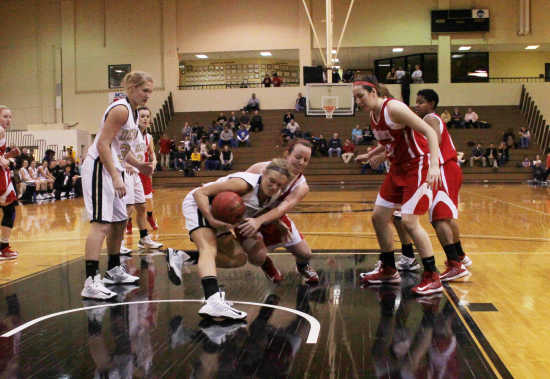 DePauw senior Ellie Pearson does the dirty work inside for the Tigers, but each player knows her role. (Banner Graphic/GRANT WIEMAN)

As the top-ranked DePauw University women's basketball team continued it dominant season by totally dismantling Wittenberg on Wednes-day, it became clear that the Tigers are capable of becoming more than a great team, but a legendary one.

DPU is more than just a collection of great players, though it is most certainly that. But it isn't their talent that makes the Tigers special, it's how perfectly constructed they are.

Their individual talents complement one another perfectly. Each player in the rotation has a specific role, tailored perfectly to her skills, and she rarely deviates from it.

"I think we really rely on people accepting roles on this team," DePauw coach Kris Huffman said. "We're looking for people that have that team mentality and selflessness."

As senior Ellie Pearson describes it, the team doesn't talk about roles, it's just a natural progression of how they all play.

"They're kind of unspoken roles," Pearson said. "We don't have any determined roles, but they're kind of known, if that makes sense."

Senior point guard Kate Walker sets the tone for the team -- passing before shooting, looking for open shooters as she attacks the lane -- but she isn't the lone leader.

She needs to average a little more than 15 rebounds per game for the rest of the season to set the DePauw career rebounding record, something she is capable of -- were she given the minutes -- but something she won't do because the team is too good for her to play enough.

(None of the starters gets more than 23 minutes per game. The Tigers blow out nearly every opponent. They learn more about execution in practice than they do in games. Echoing the UCLA men's teams of the late 60s, the only team that's physically a match for the DPU starters in the DPU bench.)

Junior Alex Gasaway is the team's leading scorer, utilizing an assortment of DeJuan Blair-like post moves to fight through contact and provide the team it's inside offensive threat.

The fifth starter, sophomore Savannah Trees, is an electric scorer capable of knocking down shots from the outside (she makes better than 50 percent of her threes) or putting the ball on the floor and knocking down a runner in the lane.

"On any given night anyone could go off for 20," Pearson said. "It's just kind of fun sitting in the locker room before the game thinking, 'All right, who is it going to be tonight?' Someone always steps up, but then if you go and look at our team it's very balanced scoring (averages)."

Each of the players is capable of more -- Walker, Ross and even Gasaway are capable of stepping outside and knocking down open threes, "In the flow of the game," Gasaway says; Pearson leads the Tigers in blocks and steals (she had four of each on Wednesday) -- but they never deviate, always staying within themselves.

The roles go beyond the starters.

Junior Alison Stephens would start for any other team in the country. She's and inside-outside scoring threat who is also second on the team in rebounds.

Senior Kat Molloy picks up the defensive pressure when Ross goes to the bench.

Whatever five-woman unit the Tigers have on the court, each player falls into her lane.

The players' willingness to take a step back with her personal numbers to help the team makes the difference between a great team and a legendary one.

It's why Butler made consecutive championship games and why the Los Angeles Lakers -- with four likely Hall of Famers -- are on pace to miss the NBA playoffs.

The players on DePauw's basketball team are very good, maybe even great. The team is phenomenal.