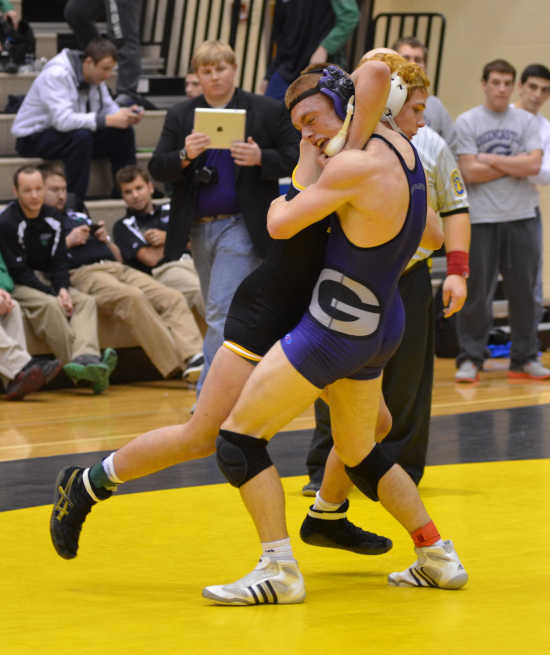 Greencastle senior Carter Lewis battled to a second place finish at sectional on Saturday. He is hoping to return to state finals for a second straight year. (Banner Graphic/TRENT SCOTT)

Aaron Langdon and Carter Lewis led the charge for the Tiger Cubs with both finishing second on the day. They were joined in advancing to the Mooresville regional by third place finisher Nick Pingleton and fourth place finishers Riley Boswell and Riley Cook.

Langdon (160) defeated Isaac Whitten of Ben Davis in his opening match by decision before pinning Kyle Reeves of Danville to advance to the final.

In the final, Langdon was thrown by Avon's Brendon Helm before being pinned midway through the first period.

Pingleton lost to Isiah Scherrer of Danville in the semifinals but picked up wins over Saevon Canto of Brownsburg and Matt Svorinic of Avon to place third.

Cook lost to Brock Hudkins, ranked No. 8 at 106, in the semifinals, then defeated North Putnam's Trae Straziscar to advance to regionals before falling to Bailey Chatterton of Avon in the third place match.

"Aaron's got to keep improving," McComish said. "He made mistakes in the finals but we get to look forward to regional, seeing who we draw and start preparing for those wrestlers.

"The same goes for Carter. Carter wrestled a really tough match in the final and if a few things go our way, we end up winning.

"Everyone will be looking to see what the draw is. We'll figure out a scouting report, develop a plan of attack and get ready to move these guys through to the semi state."

Greencastle returned wrestlers with experience in the postseason, and McComish said that can only help.

"Having guys returning to the regional prepares them for the pressure of the event," McComish added. "They have to show up and be ready to perform. They have to be at their best because there are no easy matches from this point on."