By EMILY BOWMAN, For the Banner Graphic 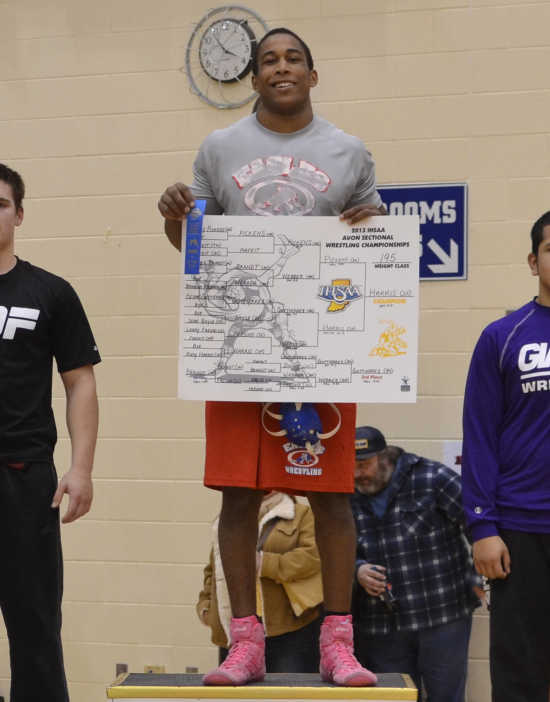 AVON -- South Putnam junior wrestler Rudy Harris won a sectional title on Saturday, helping the team to a fifth-place finish at Avon. Harris and five of his teammates will advance to regionals next Saturday at Mooresville.

SPHS coach Josh Hendrickson said he was very pleased with how his team performed and how they did individually.

"I thought we wrestled pretty well today and I am proud of the way the boys came out," Hendrickson said. "We've got six going to state, which is a really good number, and one sectional champion ... It was a pretty good day all-in-all."

In the 195 weight class bracket, Harris took it all and placed first place after defeating Danville's Autry Pickens on points in the sectional final.

Harris had four takedowns and one escape while Pickens had two escapes and one reversal.

Junior Jacob Williams took second-place for the Eagles in the 220 class.

Williams fought back from an injury in the elimination rounds, then battled tough before losing to Avon's Dylan Jones by one point in the final.

Earlier Williams and Brownsburg's Tyler Harlan hit heads, leaving Williams down on the mat and trainers were called. Williams was cleared to continue and in the last seconds of the round he took Harlan down to win the match and go on to face Jones.

Owen took third place in the 120 pound class after defeating Danville's Kyle Smith on points. Owen had two takedowns and a three-point near fall while Smith had two escapes in the third-place match.

The two wrestlers left the first round with no points given but then tied in the second and third rounds, which lead to three overtime rounds where Camacho gained an escape and won the match.

In the 160 bracket Migliano took fourth place after a losing his final match against Danville's Kyle Reeves. Migliano had three escapes while Reeves had four takedowns and a three-point near fall, which gave Reeves the win and third place.

Thompson took third place after pinning Danville's Kody Claude. Thompson had one point for an escape while Claude had two reversals and one escape.

Hendrickson said he was pleased to have another week of practice, but the team had mixed success.

"We lost a couple that I wish we wouldn't have lost but we also won a couple," Hendrickson said. "(We've) got another week of practice and regionals coming up and we are looking forward to it and hoping to wrestle another week."