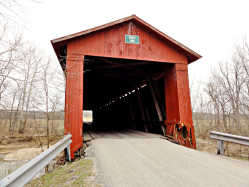 Houck Covered Bridge was damaged during an early-morning accident on Wednesday. The accident occured when an alleged drunk driver left the right side of the road and hit the guardrail until it struck the corner of the bridge.

An alleged drunk driver crashed into one of the county's oldest covered bridges in a recent early-morning accident.

County highway officials estimate it will take between $1,500 and $2,000 to repair Houck Covered Bridge, which crosses Big Walnut Creek in northern Washington Township.

The damage to the 133-year-old bridge appears to be entirely cosmetic.

Deputy T.J. Smith reported that Hutson's vehicle left the right side of the road and hit the guardrail leading to the bridge.

The SUV continued along the guardrail until it struck the northeast corner of the bridge and came to rest.

Hutson was transported to Putnam County Hospital, where he was treated for minor bleeding and tested for alcohol.

When Hutson tested above the legal limit of .08, he was taken to the Putnam County Jail and booked in at 4:24 a.m. for operating while intoxicated.

Along with the Dick Huffman Bridge in Washington Township and Dunbar Bridge in Greencastle Township, Houck is among the oldest remaining covered bridges in Putnam County. All three were erected across Big Walnut in 1880. 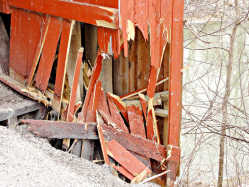 An alleged drunk driver smashed into the corner of the historic Houck Covered Bridge on Wednesday morning, causing an estimated $1,500-$2,000 worth of damage.

Houck Bridge was rehabilitated in 1994, and will be bypassed with a modern bridge in the coming years.

The new bridge will be constructed upstream of the covered bridge with two primary goals for the project.

The first is to increase the safety of the intersection of county roads 550 South and 500 West. As currently configured, 550 South takes a 90-degree turn onto 500 West immediately west of the bridge.

Not only will the new bridge connect the two roads at a safer angle, it will also take away the blind entrance to the turn (not a factor in this case) caused by the covered bridge.

The second goal is to preserve the historic structure as a walking bridge with room for visitors to get out of traffic and tour the bridge at their leisure.

Bids on the project will be accepted later in 2013, with the bridge likely to be completed in late 2014.