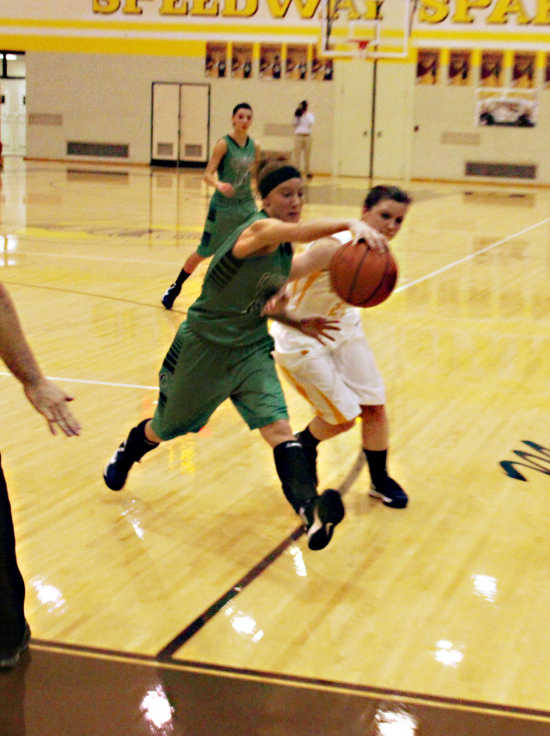 Cloverdale senior Paige Gruener beats her Speedway opponent to the ball, picking up a steal for the Clovers in the third quarter of the Sectional 44 semifinal game on Friday. (Banner Graphic/GRANT WIEMAN)

SPEEDWAY -- As the old adage says, there is a multitude of ways to remove the hide of a feline.

Though the Cloverdale girls' basketball team wasn't skinning any cats in the sectional semifinal on Friday, it was trying to slow Speedway guard Allison Nash.

The Clovers did that, but a clowder of Sparkplugs were there to help her out and Speedway got the win 49-35.

In many ways, Cloverdale outplayed the host school. It had more rebounds (40-33), shot better from the foul line (57 percent to 54 percent) and got contributions from a deeper roster.

Ultimately, though, the team just couldn't make shots. CHS finished the game 12-of-47, including just 3-of-15 from beyond the arc.

"I thought our girls did exactly what they needed to do after starting off a little bit slow," Cloverdale coach Matthew Langdon said, "and the shots just didn't fall for us tonight."

A group of seniors led the Clovers in their final high school game. Sydney Shrum hauled in 13 rebounds, scored eight points. She also chipped in three assists and two blocks playing from the high post.

Paige Gruener was the team's leading scorer with nine and Amillia Nally had six points, three assists and three steals.

CHS struggled early and fell behind 14-2 after the first quarter, though a slow start was to be expected given the long trip and the ten-day layoff the preceded the game.

The group fought back, playing mostly even in the second quarter before pulling out a stunning turnaround in the third.

"I think to end the first half we had a little run -- we hit a three, we got a steal -- that just kind of showed them, we can play with these girls," Langdon said. "The first half we played a little bit timid. I think it was just confidence. We came out in the second half with a lot of confidence. I told them, '15 points is nothing.' ... That third quarter was some of the best basketball we've seen our team play all year."

The teams' offense was clicking and the plan to stop Nash was working.

Rather than chasing Nash in full-court, man-to-man pressure, or dropping back into a box-and-one, the Clovers tried more of a hybrid that started zone and shifted to man.

"When she came into Bailee (Stevens') zone, then she would just stay with (Nash)," Langdon said. "(Nash) gets a lot of her points from somebody full-court pressing her -- face-guarding her full court. So we wanted to just play a typical, staggered-guard 2-3 zone."

Nash was flustered by the lack of pressure and her inability to penetrate, and instead settled for threes. She finished the game 4-15 from the field and scored just 13 points.

Senior Sydney Shrum fakes out her opponent to score a layup for the Clovers in the third quarter on Friday against Speedway. Shrum finished with eight points and 13 rebounds. (Banner Graphic/GRANT WIEMAN)

The third-quarter run left Cloverdale trailing by just 11 (37-26) entering the fourth, but the shots continued to not fall.

Senior Bristy Skiles knocked down a pair of second-half three-pointers but by then it was too late.

Nash had six steals for Speedway and senior ReAnna Ballard had 14 points and five steals.

"I can't say enough about these five seniors and how much they've meant to this program," Langdon said. "I'm just so proud of those girls. They may not see a lot of the results this year, but I think they really played a huge part in turning this program around. I think they've given it their all.

"They give effort every day in practice. You saw tonight. Even when things weren't going well, they were going to fight until the end. There was no give-up ... They wanted to be playing tomorrow night. They didn't want it to be over.a

Cloverdale finished its season 7-14, its highest win total in five years, and will build towards next year with a pair of sophomores who were key contributors this year, Taylor Clark and Stevens. 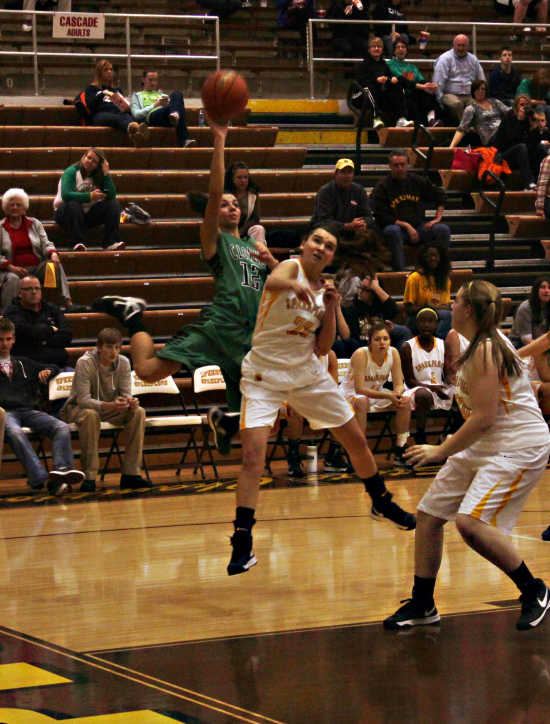