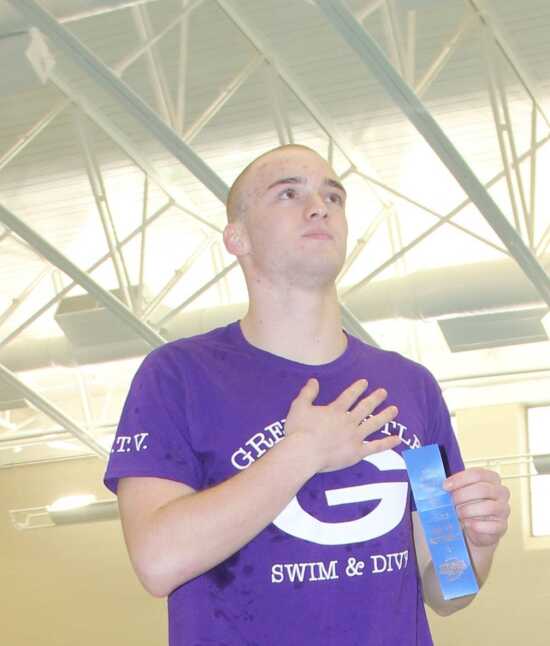 PLAINFIELD -- Greencastle junior Nash Firebaugh took some pressure off himself at Thursday sectional swimming prelims, finishing with a first- and second-seed going into Saturday's meet.

Firebaugh exceeded his seed, winning both the 50-yard freestyle and the 100-yard butterfly on Saturday, qualifying for the Indiana High School Athletic Association state finals for both events and helping his team to a fifth-place sectional finish.

"It was a good day, start-to-finish for us," GHS coach Kent Menzel said. "We ended up the day in a nice spot for the team in fifth place and scored up a bunch of points from where we were seeded to be. That was led overall by just really solid efforts, start-to-finish."

For Firebaugh, the fly win came relatively easy. He beat Avon sophomore Grant Lewis by nearly a full second (51.30 to 52.09), and both swimmers exceeded the state qualifying time of 52.66 seconds.

"He pushed harder today, which we wanted him to do, and got a new lifetime-best and a new school record," Menzel said. "He's just about right where we want him to be as he really starts to rest for next Friday's prelims at state."

His previous record, 51.32, was set last year at the state prelims. Firebaugh finished 10th in the event last season.

To advance past sectionals, a swimmer must win his heat or finish faster than the pre-designated state qualifying time.

In the 50 free, however, Firebaugh knew he needed a win to get in.

His career best coming in, set Thursday, was more than a half-second from the state time.

Only one of them could advance.

The two were neck-and-neck -- and stroke-for-stroke -- coming to the finish. Firebaugh pulled out the win by just .03 seconds.

"Winning the 50 was a big goal of the meet, and something that we had been training a lot for," Menzel said. "He had a great swim. Technically it was real solid. He had a superb start, a great turn and a very, very powerful finish to the wall. Which, in a race that's that close, is what you need. It was a very good preparation for that race next week."

Though Firebaugh was the only GHS swimmer to advance from the sectional, the Tiger Cubs had several other strong finishers Saturday.

Greencastle freshman Jacob Kessler competes in the "B" final of the 100-yard butterfly in the Plainfield sectional final on Saturday. (Banner Graphic/GRANT WIEMAN)

"Every single one of them had lifetime-best swims between those two relays," Menzel said. "I was really happy with those two solid third-place finishes from them."

"Elijah's 200 free was just so much fun to watch," Menzel said. "It was so motivating to see our girls' swim team up in the stands cheering for us at every twist and turn, so the Lady Tiger Sharks had a big part in the effort here as well."

The sectional meet was the final race for Tiger Cub seniors Alex Asbell and Tyler (Bryce) Hudson, who each provided leadership beyond their notable swimming talents.

"The key swimmer in the 400 free relay was Alex Asbell," Menzel said. "Bryce Hudson had never swam a stroke competitively up to (this season). For a brand new swimmer to come on and end up (13th) in the breaststroke ... he may have dropped nearly 20 seconds from his breaststroke from the beginning of the season until now.

"We would really like to have both of them for another year. Bryce is heading off to track season, and he's got some big fish to fry in that."

Firebaugh will continue his season on Friday at the Indiana University Natatrium, which is on the IUPUI campus in Indianapolis.

He'll be in lane one for the first heat of the 50 free and lane five for the second heat of the 100 fly. He enters the state finals as the sixth-seed in the 100-yard butterfly.