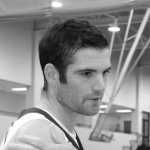 DePauw senior co-captain Barry Flynn (Indianapolis/Cathedral) took home his second North Coast Athletic Conference Men's Basketball Player of the Week honor of the season after averaging 18.5 points and 6.0 rebounds and shooting 63.6 percent from the field in wins over Wittenberg and ninth-ranked Wooster.

Last Wednesday against Wittenberg, Flynn led the Tigers to a 70-62 victory, scoring 16 points, pulling down five rebounds and dishing out three assists. In the game, Flynn missed just three of 10 shots from the floor, pacing the 53.2 percent shooting effort by DePauw.

In a pivotal 68-52 win over the ninth-ranked Fighting Scots on senior day, Flynn paced the Tigers with 21 points on 7-12 shooting from the floor. Furthermore, Flynn also recorded seven rebounds and two assists in the victory. With the win, the Tigers secured the fourth-seed in the NCAC Tournament and the opportunity to host a quarterfinal round game.

Through 25 games this season, Flynn is averaging 15.1 points and 7.0 rebounds per contest, while tallying 1.6 assists, a steal and just under one block per contest. Flynn ranks in the top-10 in four (of five) main statistical categories; points (6th), rebounds (7th), steals (9th) and blocks (9th).

Flynn and the Tigers begin their NCAC Tournament run on Tuesday, Feb. 19, night as they host Wittenberg in the quarterfinal round. The tip is set for 8 p.m. on the Neal Fieldhouse floor.