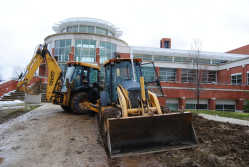 Facility maintenance crewmen from DePauw University fill in the last of the hole that had been dug up to fix a sewage problem on the eve of the biggest concert of the year for the Green Center for the Performing Arts. The maintenance crew worked throughout the night, despite the sleet and ice storm that hit Greencastle, to finish the repair project.

On the eve of one of the biggest concerts of the season at DePauw University, not only did an ice storm hit Greencastle, but a major sewage problem also erupted at the Green Center for the Performing Arts.

While the problem was detected earlier in the week, the facilities management department has been working on the job through Friday afternoon to assure that the show will go on as planned Saturday night.

Suzanne Hassler, marketing director for the DePauw School of Music, said Saturday night's appearance by Thomas Hampson, one of the world's greatest baritone singers, along with the Indianapolis Symphony Orchestra (ISO), has broken previous ticket sales records for the center.

"We never thought about canceling," Hassler assured Friday afternoon as the sewage issue was being put to rest.

The concert is scheduled for 7:30 p.m. Saturday (tonight). And among the audience members will be Judson and Joyce Green, alumni donors for whom the performing arts center is now named.

Meanwhile, other music department personnel were singing the praises of the DePauw maintenance crew as well.

"These guys (maintenance) have worked through the night, through sleet and snow," Dr. Mark McCoy, dean of the School of Music at DePauw said. "It shows true professionalism that when concert-goers come, they will be none the wiser to this."

The maintenance team worked through the sleet, snow and ice storm that struck the area Thursday night to help ensure not only that the show would go on but that full facilities would be available to Green Center audience members.

"We are enormously grateful to them," Hassler said.

Friday afternoon, with a little more than 24 hours remaining until show time, several employees remained on the scene, filling in holes and washing off sidewalks.

"From the front-row view out the window of my office," Hassler told the Banner Graphic Friday afternoon, "they just finished filling the gaping chasm and, after having covered it with sand and straw, they are -- believe it or not -- actually hosing down the walks and streets, in freezing weather, in order to clean up the ankle-deep mud around the area before our well high-heeled guests arrive tomorrow.

"These guys are incredible," she added. "They deserve a commendation."

Audience members will be able to file in to their seats and listen to the historic concert, unaware of all the work that had been going on a short time earlier.

For his appearance in Greencastle, Hampson will sing "Des Knaben Wunderhorn" ("The Youth's Magic Horn"), a suite of songs by the Gustav Mahler, the famed conductor of the Vienna State Opera from 1897 to 1907.

Joana Carneira will guest conduct the Saturday night performance with the ISO, which also includes Robert Schumann's "Symphony No. 2 in C Major, opus 61."

Tickets are $12 and may be purchased in person at Green Center box office, 605 S. College Ave., or online at www.depauw.edu/music/tickets.

Admission to School of Music events is free to all DePauw students, children age 12 and younger, and seniors over 65 years of age, (however, but tickets are required).