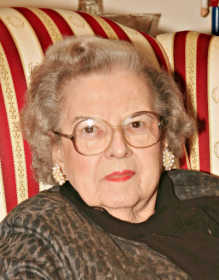 When she was 15, her father died and she and her mother moved from the farm to Greencastle, where she graduated from high school in 1942.

She entered the three-year nurses' training program at City (later General, still later Wishard) Hospital in Indianapolis and formed lifelong friendships with many of her classmates. After graduation with a Registered Nurse diploma in 1945, she began working at City Hospital.

Josephine married Ralph A. DeWeese, also of Fillmore, on April 7, 1946, and settled in Speedway, where their sons were born.

She continued her work at General Hospital but soon moved to Methodist Hospital, where she worked for 32 years until her retirement in 1985.

Through much of her career at Methodist, she was emergency department supervisor and night shift nursing supervisor; she later served as nursing coordinator of radiation oncology, until her retirement.

Josephine enjoyed the new circles of friends and coworkers she met through her work and volunteer activity. She loved music and theater and traveling and staying in touch with friends old and new. She admired hard work and frugality, and balanced a keen appreciation for a bargain with unstinting generosity to her sons and their families and to a wide range of causes and charities.

She willingly provided guidance when family and friends looked to her for their healthcare needs.

Josephine was preceded in death by her parents; one sister, Lois Coffman; and her husband, in 1997.

Visitation will be Monday evening from 3-8 p.m., also at the funeral home. Entombment will take place in West Ridge Cemetery.

Memorial contributions can be made to WFYI or the Putnam County Museum.

Friends are invited to leave online condolences for the family at www.flannerbuchanan.com.