Ruling allows ex-band teacher to finish his sentence on probation 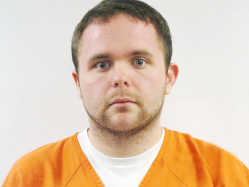 One of the three former North Putnam staff members originally charged with child seduction involving the same 16-year-old male student has been ordered released on probation.

Last Dec. 20, Headley sentenced Rogers to 18 months in the Indiana Department of Correction with six months to be served in prison and the remaining year on probation.

As of Thursday, Rogers had served 63 days since reporting to the DOC on Jan. 7 with another 28 days scheduled to be served.

Rogers' sentence modification petition, filed Jan. 28, requested the court reconsider his sentence and urged the judge "to impose a period of probation instead of the period of incarceration that has previously been imposed by the court."

"I would only point out," Bookwalter stated, "that the defense has not given any reason to modify the sentence or shown any change in circumstances that existed at the time of sentencing."

Bookwalter again called upon the father of the victim to argue against any sentence modification for Rogers, who was the first of three former school staff members sentenced in the widely publicized case.

The victim's father was left shaking his head in disagreement after Judge Headley suggested the man was not going to be happy with the decision he had reached. Headley approved the sentence modification, ordering Rogers' release on probation.

In December, Rogers had entered a guilty plea to child seduction, a Class D felony, in a plea agreement with the Prosecutor's Office.

Rogers was accused of fondling the teenager in an incident at the school.

At his Dec. 20 hearing, Rogers admitted he had "caused pain to the student and his family. I apologize to them ... not only this student but to all of the students."

The victim's father has said he doesn't believe Rogers is remorseful, calling him a predator and noting that his son was not in band or even a music student.

Rogers and fellow faculty member Nicholas Vester, 25, Lafayette, an interim Spanish teacher, reportedly dated each other and conspired to prey upon the victim, court records indicated.

Sentences for both Rogers and Vester include being listed on the Indiana sex offender registry for 10 years, a no-contact order with anyone age 16 or under and revocation of their Indiana teaching licenses.

Largent's sentence is not expected to include listing on the sex offender registry, Bookwalter said.

On Feb. 7, Vester offered a straight guilty plea to child seduction (with no benefit of a plea deal) and was sentenced by Headley to two years in prison.

Sentencing of Largent, who is pleading guilty to a lesser charge in a plea agreement with the Prosecutor's Office, is set for 11 a.m. March 21.

Although all three defendants faced the same charge of child seduction, court documents indicate they shared varying levels of involvement with the teenage victim.

While Rogers was accused of fondling the teenager in an incident at the school, Largent's contact with the victim allegedly included kissing the boy once in a North Putnam classroom.

The encounters between the school personnel and the student occurred both on and off school property, the investigation showed, over a period from November 2011 through January 2012.

The case came to light in January 2012 when the teenager and his family contacted authorities.