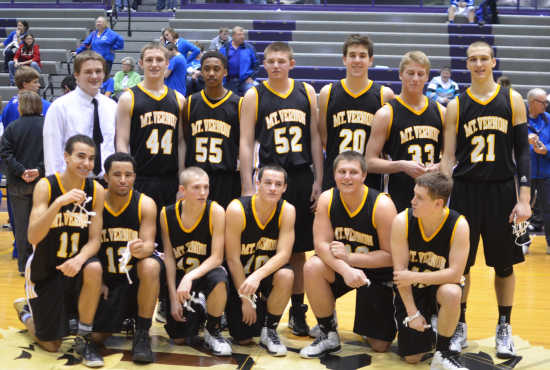 Though basketball season may have been over in Putnam County, Greencastle's McAnally Center still had one more offering to showcase boys' basketball in 2013, one C.J. Coleman took with aplomb.

Coleman dragged Class 3A No. 1 Mt. Vernon (Fortville) through a rough first half before setting the Marauders on their way to the semi-state with a 70-49 win over No. 9 Frankfort in the Greencastle regional final.

Mt. Vernon had already defeated another Sagamore Conference foe in Danville earlier in the day while the Hot Dogs glided past Greencastle-sectional winner Edgewood to make the final.

Both squads played with the kind of defensive intensity in the first half that justified the rankings they held.

Frankfort took its only lead of the game early on a three-point shot from Isaac Rudd that gave the home team on the scoreboard a 3-2 advantage.

Emotions ran high in the opening frame and, with most of McAnally occupied by supporters from both schools, an early flagrant foul on Mt. Vernon's Anthony Burnett could have sparked Frankfort to life.

Coleman, however, had an answer to every Hot Dog question in the first half as the junior guard scored 14 of the Mt. Vernon's 18 first-quarter points.

Only Coleman and forward Stephen Turner could find the basket for the Marauders, but their swarming 1-3-1 defense denied Frankfort the chance to eat into an 18-10 first-quarter lead.

Coleman continued to keep the Hot Dogs at bay single-handedly, but a late 8-2 run, capped by a Nathaniel Wissman three-point play with :00.4 seconds left saw Frankfort trail 27-24 heading into halftime.

Christian Smith tied the game twice for Frankfort to start the third quarter but, as attention began to turn toward Coleman, the rest of the Marauders finally got involved on the offensive end.

Burnett knocked down a three that was answered by Rudd, only for Turner to knock down back-to-back threes without reply from the Hot Dogs.

By the time the third quarter ended, Mt. Vernon notched three more threes, including a backbreaker at the buzzer by Zach Spears that gave the Marauders a 53-40 lead.

A desperate Hot Dog offense then went cold at the worst time, missing its first seven shots of the final quarter and going 3-15 from the field, only scoring nine points in the final eight minutes.

Coleman, who was shut out in the third quarter, scored the last eight of his game-high 29 points in the final frame, helping to secure the school's first regional title since 1991.

Turner, the only other player to score in the first half for the Marauders, finished with 18 points.

Frankfort was paced by Dakota Isgrigg's 14-point effort while Rudd added 13 for the Hot Dogs, who finished the year with a 21-5 record.

Mt. Vernon (24-1) will take on Class 3A No. 2 Greensburg next Saturday at the Richmond semi-state, following the conclusion of the Class 2A semi-state game between Speedway and Linton-Stockton that begins at 1 p.m.