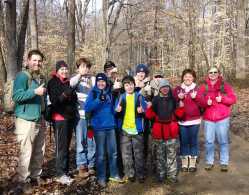 Weather conditions were pleasant, however the trail was rather muddy in places.

The trail was named in remembrance of longtime Scouter Al White, who died in October 1963 following a propane gas explosion at a Holiday on Ice Show at the Indiana State Fairgrounds Coliseum.

The Al White Memorial Trail was originally dedicated in his honor on April 30, 1966 and operated for 36 years until its closure in 2002.

Through a continued relationship between the Wundchenneu Chapter (Boy Scouts of America, Order of the Arrow) and Indiana University, the trail reopened after a decade of inactivity. Additionally, the scouts hike provided credit toward for their Hiking Merit Badge.

Anyone is interested in additional information regarding participation in the Greencastle Boy Scout Troop 99, contact Scoutmaster Rod Weinschenk.