Putnam among largest number of counties to post decline since 1986 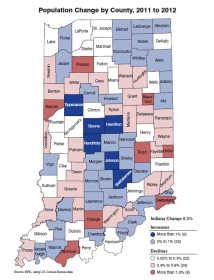 Putnam County was among 54 Hoosier counties suffering a decline in population during the period 2011-12, the Indiana Business Research Center (IBRC) reported Friday.

Population in Putnam County, which had reached a high of 37,963 with the April 2010 Census, has dipped each of the succeeding years, according to population estimates released by the U.S. Census Bureau and analyzed by the IBRC at Indiana University's Kelley School of Business.

That translates to a 171-person decline (or 0.45 percent), ranking Putnam as one of 24 Indiana counties reporting a 0.4-0.9 percent population loss.

Those figures ranked Putnam 73rd among the 92 counties in lost population by number and 67th by percentage.

Overall, 54 counties declined in population during the period, 22 by 0.2-0.3 percent and another eight by more than 1 percent.

Only six counties showed an increase in population of more than 1 percent during the period -- Hendricks, Boone, Hamilton, Barth-olomew, Johnson and Tippecanoe. Another 32 showed a less than one percent increase.

Among contiguous counties, Putnam County suffered biggest decline during the period with its 171 nearly the same as Owen County, which saw a subtraction of 167 residents.

Hendricks showed the biggest increase among contiguous counties by adding 2,001 residents over the period, while Morgan's numbers jumped by 179.

Population growth in many of Indiana's suburban communities was still not back up to speed in 2012, and population decline was widespread in many other regions of the state.

In terms of annual growth rate from 2011 to 2012, suburban communities in the Indianapolis metro area claimed four of the top six spots among all Indiana counties.

Hamilton County was the state's fastest-growing county with a 2.2 percent increase, followed by Boone County at 2 percent. Hendricks (1.3 percent) and Johnson (1.2 percent) counties ranked fourth and sixth, respectively. However, the growth in Hamilton, Hendricks and Johnson counties was well below their annual averages from 2000 to 2010.

Hendricks County's population growth in 2012 was roughly half as large as its annual average in the past decade, while Johnson's growth last year was nearly three-quarters as large. Boone County, in contrast, was able to buck this trend, as its growth of 1,139 residents last year was slightly higher than its average annual growth from 2000 to 2010.

Following two years (2010 and 2011) when it ranked among the top five metro areas in the country in Gross Domestic Product growth, Bartholomew County (Columbus) was the state's third-fastest-growing county with a 1.7 percent increase last year. This marks Bartholomew's fastest one-year growth rate since 1995.

Tippecanoe County rounded out the top five fastest-growing counties with a 1.3 percent rate of change.

Outside of a handful of metropolitan areas, many Indiana communities lost population in 2012. Lake County had the state's largest population decline in 2012 at 1,535 residents, followed by Madison County (-741), Delaware County (-420) and Wayne County (-347).

"With a few notable exceptions, population growth is proving to be the ultimate lagging indicator in our steady yet slow economic recovery," said Matt Kinghorn, IBRC state demographer. "However, the experience of a community like Bartholomew County shows that a dynamic local economy will attract new residents."

Hamilton County had the state's largest net in-migration in 2012 at 3,779 residents.

At the other end of the spectrum, 67 Indiana counties had a net out-migration of residents in 2012, led by Lake and St. Joseph counties with a net outflow of 3,229 residents and 1,317 residents, respectively.