Workmen labor to dismantle the metal framework of the old Sonic restaurant curb service area in Putnam Plaza along Indianapolis Road Thursday. The site has been purchased by Dairy Queen and will become a Grill and Chill business by this summer.

A blizzard of demolition activity at Putnam Plaza is just the appetizer for what's coming to town later this spring -- a Dairy Queen Grill & Chill store.

City Building Inspector Dave Varvel confirmed Thursday what has been rumored for several weeks, that Dairy Queen has indeed purchased the old Sonic property on Greencastle's East Side and will be making its return to Greencastle.

Demolition crews were busy Thursday morning, dismantling the canopies and parking stalls used by Sonic to provide curb service, and trucking away the metal for recycling purposes.

Sonic, after only a few months of operation, closed just before Thanksgiving in 2010, offering the message "See you in the spring" on its marquee for months. Sonic, however, never reopened and the building has been for sale the past two years.

"Dairy Queen has purchased the property," Varvel verified. "All the paperwork has been submitted to the state. I have not seen the final plans, but it's a 'go,' they're definitely coming."

City Planner Shannon Norman also confirmed that Dairy Queen officials told her they had purchased the Sonic site and talked about enclosing the outdoor seating area to provide an inside sit-down dining section.

Dairy Queen officials have told Varvel they plan a Grill & Chill version of their ice cream and sandwich shop, a business that began in Joliet, Ill., in 1940.

The Grill & Chill is DQ's preferred concept for new and renovated full-service restaurants, its website indicates. Stores are larger than the older-style DQ Brazier locations and feature a completely different store design.

In most cases, Grill & Chills offer an expanded menu, including breakfast, GrillBurgers and grilled sandwiches, as well as limited table service (customers still place orders at the counter).

Varvel said the Greencastle location design includes a drive-through, a walk-up window and inside seating.

"The building will be reconfigured a little bit," he added.

Overall, the old Sonic design will disappear, he said.

"It'll be reconfigured to meet the standard corporate (DQ) facade. It'll look practically new, you won't recognize it after the remodel," the city building inspector said. 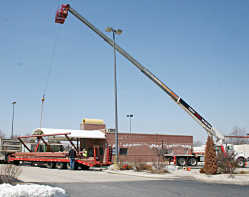 A crane lifts a piece of the canopy framing from the old Sonic curb service area onto a waiting truck Thursday. The Putnam Plaza parcel has been purchased by Dairy Queen.

While all that work will take a couple of months, Dairy Queen hopes to be up and running locally before the ice cream season hits full stride.

"I assume that means before the warm weather gets here," Varvel noted.

Present plans do not include an addition to the building, although Varvel carefully notes, "no plans are ever final. We'll wait and see how that plays out."

Greencastle previously had a Dairy Queen on the north side of Indianapolis Road, just west of Longcastle Drive, where the Marathon station currently operates.

That location burned -- a fate that had previously befallen the Cloverdale DQ -- in approximately 1988 and never reopened.

Dairy Queens were a fixture of social life in small towns of the Midwestern and Southern United States during the 1950s and 1960s.