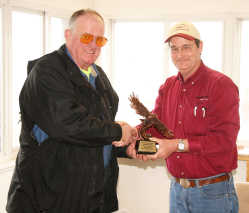 In a bittersweet ceremony at the Putnam County Airport office Wednesday night, Airport Board President J.R. Scott (right) presents a statuette and plaque to Art Evans, founder of Dixie Chopper and president of Dixie Chopper Air. Evans and Dixie Chopper Air will terminate their status as fixed base operator (FBO) at the airport as of April 1.

The Putnam County Airport finds itself in need of new management following the resignation of Dixie Chopper Air, effective April 1.

Art Evans, founder of Dixie Chopper and president of Dixie Chopper Air, terminated the contract as airport fixed base operator (FBO), detailing in a letter to the board that "the current management fee is insufficient to offset the cost to operate the airport and provide the required services."

Despite the decision to terminate the relationship, Evans received nothing but praise from Board of Aviation Commissioners (BOAC) members, including President J.R. Scott, who presented Evans and Airport Manager Doug Miller with tokens of the board's appreciate in a ceremony at the FBO office.

Evans was instrumental, Scott said, "in the largest single growth spurt this airport has even seen."

Following an investment of nearly $3 million by the City of Greencastle and Crown Equipment in extending the runway to more than 5,000 feet to accommodate jet landings and takeoffs, Evans and Dixie Chopper made an investment of their own.

Evans and his Fillmore-based company put up $2.5 million to build the Dixie Chopper Business and Convention Center facility at the airport. It offers pilots access to "the only facility in the state of Indiana with a hotel, restaurant, pub and conference center on the field."

Dixie Chopper will still own and operate that facility, which is not involved in the FBO contract.

Wainman noted that the airport facility "grew and benefited" from the association to "become a real active airport." 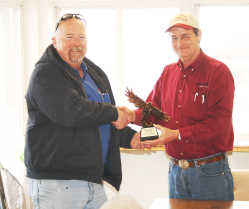 Also honored Wednesday night at the Putnam County Airport office was Airport Manager Doug Miller (left) of Dixie Chopper Air, a mainstay at the facility the past 20 years. Airport Board President J.R. Scott presents a statuette and plaque to Miler in appreciate of his efforts. Dixie Chopper Air will terminate its status as fixed base operator (FBO) at the airport as of April 1.

But it could be so much more, Evans stressed, essentially preaching to the choir after receiving recognition from the group.

After all, he said, the local airport has one of "very few runways in the state with a 5,000-foot approach."

"The city and county don't realize what a crown jewel they have here," Evans, the one-time Indiana Entrepreneur of the Year, offered. "This thing could be so much more."

But in order for that to happen, the 71-year-old Evans related, the county must either fund the facility adequately, allow the BOAC to become an airport authority with the ability to raise funds or allow it to become a regional feeder airport under control of the Indianapolis Airport Authority (IAA).

"It is my understanding that is the IAA's desire," Evans also noted, favoring that idea as "the best option for all."

Above all, he said transforming the facility into Putnam County Regional Airport would be huge for future development.

"It needs to be Putnam County Regional," Evans said. "Then you'd start to see companies that utilize aviation as part of the business spring up all around here."

And it would increase airport use and consequently, fuel sales as well, he reasoned.

"You aren't going to get any jet traffic without a name change," Evans said. "It would make all the difference in the world getting people to land here as Putnam County Regional. Perception is everything."

Perception is not reality at present, however, and financial issues have taken Dixie Chopper Air out of the immediate picture.

"The current revenue potential does not compensate for the significant losses that I have incurred in operating the FBO for the past years," Evans said. 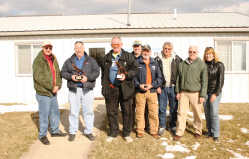 "In summary," his termination letter notes, "I have appreciated the opportunity with Dixie Chopper Air but I cannot continue to support the losses that this business has been forced to incur."