Alexis J. Holbert-Darkis, 20, of Brazil, died Saturday, April 6, 2013 from injuries sustained as the result of an automobile accident. 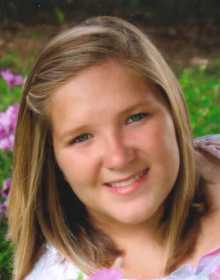 Alexis was a 2011 graduate from Northview High School. She also attended University of Southern Indiana.

She was currently working for IAC in Greencastle.

Lexi was a five-year Northview band member and she found her joy in playing her instruments with the band. She played clarinet, bass clarinet, saxophone, mellow phone and French horn. She received a state champion ring twice during her time with NMK. She played during marching band, concert band and with the jazz band.

She was preceded in death by great-grandfather George Brown; great-grandparents Delbert Darkis and Patricia Darkis; and grandmother Linda Holbert.

Services will be conducted at 2 p.m. Saturday at Lawson-Miller Chapel, Brazil, with Pastor Harvey Weaver officiating. Visitation will be 4-9 p.m. Friday and again Saturday prior to services.

If friends so desire, donations may be made to the Northview Marching Band for student expenses. Envelopes will be available at the funeral home.

Light a candle in her memory at www.lawson-millerchapel.com.