Tied up in a bow 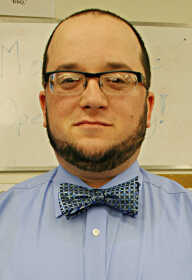 It's not often that anything I do could be described as trendy.

I'm a balding, 30-something who gets 10 miles per gallon and thinks music reached its high point in 1992.

So when I added a couple of bow ties to my repertoire in recent months, it was with complete ignorance of the fact that the classic piece of neckwear has staged something of a comeback in recent years.

I probably should have been clued in by the fact that I was actually finding them in common stores like JCPenney and Kohl's. But I'm kind of dumb and oblivious.

No, I bought the first one because a buddy of mine was getting married and I thought it would look nice at the ceremony.

I discovered a couple of things in donning my new purchase.

One is that I like doing things the hard way. Learning to tie a bow tie falls right in line with grilling with charcoal, driving a stick shift and drinking Irish whiskey. Sometimes a little bit of discomfort is a good thing.

Secondly, a bow tie is much less likely to stain than a standard tie. When I inevitably miss my mouth with food, it's going to hit my (machine washable) shirt, rather than my (dry-clean-only) necktie.

I also seem to like standing out. Is it any surprise that the first person from Warren County, Ind., to own a Mini Cooper also now wears a bow tie? Of course it isn't.

As for fashion statements, I didn't think I was saying too much beyond "Hey, look at the weird guy in the bow tie."

It's been pleasantly surprising, though, the number of compliments I've gotten. The word "dapper" has come up more than once, and that's a word I would not have dreamed of self-applying.

"Slovenly" comes closer to my natural state of being.

I've also drawn some comparison to a certain Putnam County prosecutor. "Are you trying to be the new Tim Bookwalter?" is the common theme.

Well, to be a true Bookwalter clone, I would need to get a lot taller (impossible at this point) and a lot thinner (possible but unlikely).

I will, however, take the comparison as a compliment. Bookwalter is a sharp-dressed man.

The most illuminating conversation I've had came with Greencastle Schools Superintendent Dawn Puckett on Wednesday evening. She commented on the tie and, of course, I gave her banter I give everyone -- still learning to tie it, hard to get food on it and all the rest.

But then she told me that at the recent Greencastle High School National Honor Society induction, she noticed two or three high school kids wearing bow ties.

I wasn't sure what to do with this information. Hell, I struggled to do anything cool when I was in high school 15 years ago. How can I have finally stumbled into something cool at 32 years old?

Confusion was still swirling through my head 20 minutes later when I noticed a young lady smiling at me as I walked through Kroger.

I smiled back, out of courtesy.

But then she kept smiling as she walked toward me. I kept smiling my goofy, crooked, confused smile back at her so as not to be rude, but why was she still looking at me? I didn't know this young lady (I don't think) and she was sure as heck too young to be flirting (I think).

Then as she passed, I got my answer.

"Thanks," I said with a sigh of relief. I had forgotten (never known?) what it was like to be awesome.

Maybe things would be simpler if I'd switch to an ascot ... or perhaps a bolo.