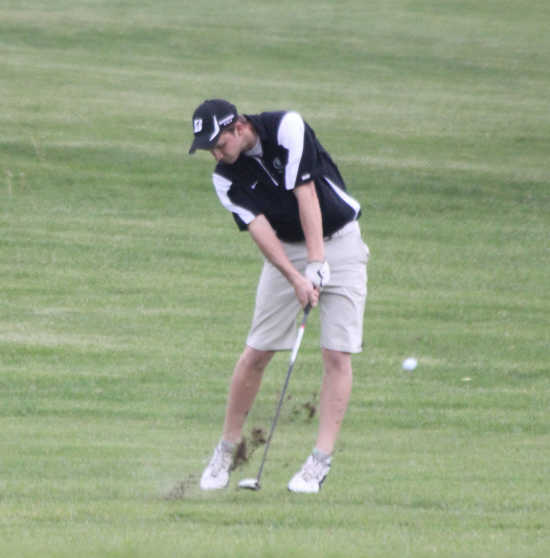 Cloverdale's Freddy Fislar takes a shot from the fairway in a match earlier this year. Fislar and other Clovers fought through adversity to finish strong on Wednesday. (Banner Graphic/GRANT WIEMAN)

LINTON -- A two-week layoff had the Cloverdale boys' golf team looking ugly during its round at Phil Harris Golf Course on Wednesday, but the beauty of the play doesn't matter, just the final score.

The Clovers recovered with a solid 177, finishing second at the four-team meet. Terre Haute South was first with a 165, host White River Valley was third with a 204 and Shakamak had an incomplete team.

"We ended up scoring much better than it appeared we would as I watched," Cloverdale coach Doug Wokoun said. "The two-week layoff between matches was certainly not a good thing for us. We gritted out quite a few missed shots and less than desirable course management.

"In the end I guess that is a good thing in terms of our ability to scramble and improvise."

Recovering from a minor injury, Rylan Mattocks shot a 42 to lead the Clovers in the their final tune-up before sectional play begins on Monday.

"Rylan played well at times, but showed some rust," Wokoun said. "His injury appears to be less of an issue now, which is a good thing heading into sectional.

"Aaron was cruising along until his eighth hole and he lost several shots. Overall his effort was pretty good. Kylar had a pretty good round, although he found some trouble in a couple of places.

"Freddy has been battling a severe allergy and played well under the circumstances. We are hoping he can get that under control over the next few days so he will be good to go on Monday."

Cloverdale (13-8) plays in the Martinsville Sectional on Monday at Martinsville Country Club. Golfers begin teeing off at 11:30 a.m.