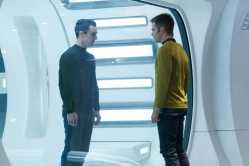 Benedict Cumberbatch and Chris Pine in "Star Trek Into Darkness"

With the latest installment of the newly resurrected Star Trek film franchise, director J.J. Abrams and company have once again taken big moments in the Trek mythos and given 'em a twist.

I've been a huge fan of Abrams for years and his ability to take an existing franchise and give it a shot in the arm is amazing. He did it with "Mission Impossible" and continues to do so with Trek.

In "Star Trek: Into Darkness," Abrams and screenwriters Roberto Orci, Alex Kurtzman and Damon Lindelof take the old, make it new, give it a twist and deliver a film that will please longtime fans and newbies alike.

At the heart of "Into Darkness" is the mysterious James Harrison (Benedict Cumberbatch). He seems hellbent on wreaking havoc on Starfleet, but when his true motives and identity are revealed, that's when things get interesting. Is he a good guy? A bad guy? Or simply the victim longing for revenge?

In truth, he just might be a little of all three when the events begin to play themselves out.

After being stripped of his command of the Enterprise, Kirk's time as first officer is short-lived when Harrison attacks Starfleet Command. Kirk asks for and is granted permission to hunt Harrison down after he retreats to the Klingon world of Kronos.

The Enterprise is given special cargo -- 72 newly designed photon torpedoes -- and instructed to fire its payload at Harrison's location on Kronos and return. Instead Kirk makes the call to bring Harrison in to answer for his crimes. Tidy and clean.

Kirk makes the call to bring Harrison in to answer for his crimes, but once Kirk and crew arrive on Kronos, they are attacked by Klingons, but an unknown person takes out the Klingons almost entirely on his own. Harrison reveals himself to be the shrouded figure and quickly surrenders after a confrontation with Kirk.

From there, things get more complicated when we learn the Enterprise's new torpedoes contain a surprise no one anticipated. Now Kirk and the crew, including the Carol Wallace (Alice Eve), someone fans will recognize from the original movies. Shhh, I can't tell you who, you have to figure it out on your own.

The film is filled with exciting action sequences, including a climactic chase scene that is worth the wait, transitioning from space to Earth and showing Spock's more human side.

Although the entire cast does a great job, the standouts in "Into Darkness" are Pine and Cumberbatch. Pine encompasses everything that makes Kirk -- well, Kirk. He's arrogant, rash and an egomaniac, but in this film we also get to see Kirk grow and it's a great thing to see.

Cumberbatch, known for his take on Sherlock Holmes on the BBC's "Sherlock," is added to the mix and is amazing as the film's antagonist. He was part of the Oscar-nominated "Tinker Tailor Soldier Spy," Steven Spielberg's "War Horse" and Peter Jackson's "The Hobbit," but "Star Trek: Into Darkness" will make him a household name.

Final Cut: "Star Trek: Into Darkness" is an action-packed summer blockbuster that delivers on almost every level. Abrams blazes new trails for the franchise's future, but stays true to what brought fans to "Star Trek" in the first place.

Pine once again is great as Kirk, and Cumberbatch is so great in his bad guy role, it will leave you yelling his name -- well, at least Spock did. Wink.