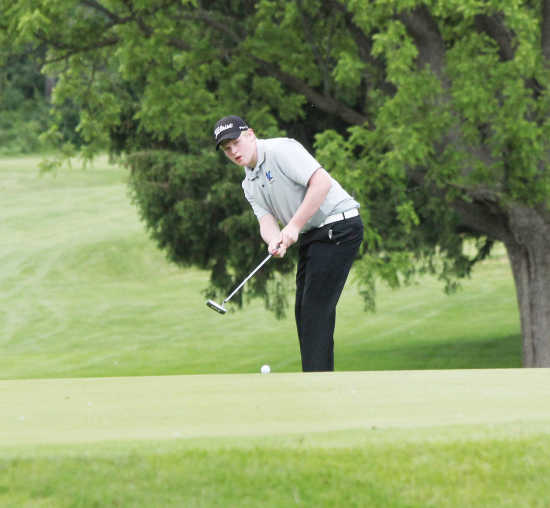 CRAWFORDSVILLE -- When the finals scores were posted and the team totals for Monday's sectional boys' golf tournament came in at Crawfordsville Municipal Golf Course, it was clear the South Putnam team was short of qualifying for regionals.

The Eagles finished in 11th place with a 391 total. But SPHS coach Brian McClure still studied the board intently. The top three teams get a pass to regionals, but so do the top three individual golfers who aren't on a qualifying team.

Junior Derek Chestnut shot an 83 and was the Eagles' best golfer. His score was seventh-best overall, but three ahead of him were on the top two teams.

There was tie for third place. Southmont's Taylor Monts shot an 82 and Crawfordsville's best 88.

"Derek played well," McClure said. "He hit the ball great. He didn't score as well as he hit it and had a rough stretch at the end. He finished with an 8-6 (on the last two holes), which ended up costing him."

While missing out on such a close call, McClure said the positives will outweigh the disappointment.

"He's got a lot to be happy about," he said. "It's hard for him to see it right now, but he's still got another year. Hopefully he'll come back and be a lot better next year."

The remaining South Putnam golfers didn't perform up to the same standard as their No. 1.

Justin Berry was second on the Eagles with a 93, Jimmy Rutter third at 100 and Austin Query and Chad Menke each shot a 116 at the 18-hole event.

Rutter, a freshman, started with an 11 on the first hole, then settled in for a very quality round after.

"For three of our players, this is the first time they've ever played sectional," McClure said. "We're getting some experience from them. Our Nos. 1 and 2 thought they had a realistic chance (of advancing) if they played well.

"Derek and Justin both played well, but it wasn't our day. We'll move on and try it again next year."

The young Eagles squad will have a chance to improve its standing next season with many of its golfers returning with eligibility.