Gas prices up more than 30 cents 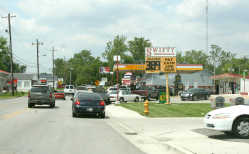 Reacting to a fuel price increase of more than 30 cents a gallon at most local stations, motorists line up onto Bloomington Street to get gas for $3.89 per gallon on Wednesday afternoon. By late afternoon, Swifty and the Phillips 66 at Franklin Street and Indianapolis Road became the last two stations in the city to raise their prices to $4.25.

Greencastle consumers who went to bed to an average per gallon gasoline price of $3.89 on Tuesday evening got an even more rude awakening on Wednesday.

Gas prices soared to $4.25 at most stations in the city on Wednesday.

According to GasBuddy.com, prices are currently on the rise in the Hoosier State, with an average price statewide of $4.11 per gallon as of mid-afternoon Wednesday.

Compare this to a national average of $3.68.

The 36-cent jump is easily the largest increase seen by Greencastle consumers recently, but not an isolated incident. Prices were as high as $3.99 last weekend, compared to a low of $3.48 on Memorial Day.

Not all local stations raised prices at the same time, leading to a rush on gas at the Phillips 66 at Franklin Street and Indianapolis Road and Swifty on Bloomington Street.

Both of these stations, however, had also raised their prices to $4.25 by late afternoon.

Prices remained lower in Bainbridge and Roachdale, where gas was going for $3.93 per gallon shortly after 4 p.m.

In Cloverdale, reported afternoon prices ranged between $4.19 and $4.25.

Low prices reported in the state on Wednesday were $3.48 in New Albany and Clarksville. The high price in the state as of late afternoon was $4.40 in Hammond.

While the reason for gas price fluctuations often remains shrouded in mystery, speculation and conspiracy theory, reports from AAA are that Hoosier motorists have reason for hope in lower prices.

The reason for high Midwestern prices in recent weeks has been refinery maintenance along with other production issues that have led to tight supplies.

With many of these maintenance issues coming to an end, much of the Midwest is beginning to see gas prices creep downward.

Unfortunately, Indiana is one of three states, along with Ohio and Michigan, continuing to see prices increase here in the first week of June.

"These isolated higher retail prices have been due to heavy demand for wholesale gasoline in the Chicago market, as the summer driving season gets under way," Monday's AAA Fuel Gauge Report Overview stated.

The demand out of Chicago, coupled with the lingering refinery outages, is unfortunately impacting Hoosiers at the pump.

The AAA report went on to say that prices could continue to creep upward this week, but that lower prices are expected nationwide and in the Midwest, as June continues.

"Prices should drop below a national average of $3.50 per gallon by the end of the month if refineries can transition smoothly from ongoing maintenance to full production," the report said.

It remains unclear where this expected lower national average will leave Indiana, a state with consumers unaccustomed to some of the nation's highest gas prices.