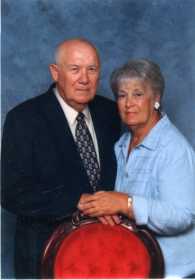 Jerry and Shirley Baker of Bainbridge will celebrate their 60th wedding anniversary on Wednesday, June 26, 2013. A small family reception is planned for the weekend following.

Jerry and the former Shirley Thompson were married on June 26, 1953 in Zionsville by the Rev. Vern Bigler in the Methodist Church he pastured there. Rev. Bigler had previously served as minister to churches Jerry and Shirley had attended in Putnam County.

The Bakers are the parents of four children: Jeretta Reynolds and husband Doug of Greencastle, Joe Baker and wife Rosie of Bainbridge, Janet Lane of Bainbridge and Joyce Reed of Westfield. They have eight grandchildren and 11 great-grandchildren.