Spirit of Philanthropy awarded to Romine 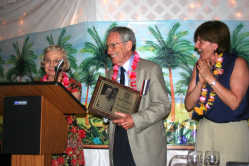 The Putnam County Community Foundation held its annual dinner and meeting on Wednesday, June19. The foundation honored several members that night. Malcolm Romine (center) was one honored that night with the Spirit of Philanthropy award. Elaine Peck (right) and Ellie Ympa (left) presented the award to the surprised Romine.

Malcolm Romine sat at that Putnam County Community Foundation annual meeting listening as the speaker started describing the Spirit of Philanthropy on Wednesday night. It wasn't until the speaker talked about moving away from Putnam County that Romine realized he had won the award.

"You're very good at keeping a secret." Romine said, with a big grin to his companion at the table.

The Spirit of Philanthropy award is presented when a person or people go above and beyond what anyone expects.

Romine was born and raised in Putnam County and has been giving back to the community that helped foster him at an early age.

During a small speech he told the crowd that his education at Putnam County schools put him above and beyond those when Romine headed to high school in Indianapolis many years ago.

Romine has been part of the Putnam County Foundation for many years and has penned a book chronicling the first 25 years of the group called Inspiring the Giving Spirit. The book is one of his many contributions to the community. He has also helped the Putnam County museum raise $150,000 in the past several years.

Along with honoring these two men the board voted in two new first term board members: Scott Herick, general manager of Bittles and Hurt and Hopkins-Rector Funeral Homes, and Nancy Wells, who is currently serving as president for the Putnam County Planning Commission. Three others were voted in as second term board members: Brad Hayes, principal of Fillmore Elementary, Todd Lewis, chief operations officer for First National Bank in Cloverdale, and Vickie Knoy Parker, co-chair of the scholarship committee for the community foundation.

The Putnam County Community Foundation is responsible for administrating funds, awarding grants and scholarships for groups around Putnam County. With more than 220 different funds from donors supporting charitable organizations the foundation and its members have worked to help Putnam County.

To find out more information about the Putnam County Community Foundation people can got to www.pcfoundation.org. The Foundation also has pictures of the annual dinner and meeting on its Facebook page.