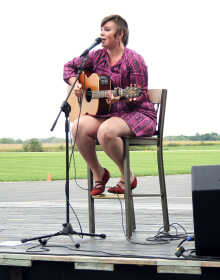 Banner Graphic/ ERIC BERNSEE
Greencastle native Mary Michael will perform at this week's installment of ParkFest, set for 6:30 p.m. Tuesday at Robe-Ann Park. The duo Bridge 19 will also be on the bill Tuesday.

This week's scheduled musicians for ParkFest are two female-led acts, which both claim folk style.

The performers -- Bridge 19 and Mary Michael -- will play at the free 6:30 p.m. concert on Tuesday, July 9 at the Bob Flanigan Bandshell in Greencastle's Robe-Ann Park.

Bridge 19 is the project of Amanda Lucas and Audrey Cecil. The ladies mix pop, folk and Americana in their sound.

Having shared the stage with a number of nationally and internationally known acts, Bridge 19 released its debut album "The Fall Back" in May 2012.

With "The Fall Back," we get all the familiar qualities we are used to hearing from Bridge 19; the harmonies of course, spirited melodies paired with intense lyrics, agile guitar and layers of instrumentation. But there's a new feeling that comes with this studio release; the feeling that the duo went "all in" emotionally.

Following Bridge 19 is Greencastle native Mary Michael, now living in Chicago. Growing up locally, Mary was introduced to the music world by her father Steve Michael, and started learning to play guitar under John Little at the Greencastle Music Center on U.S. 231 North.

Eleven years later, Mary has cultivated her own unique style, honing in on jazz, blues and soul, while blending in the rock and folk influences she found in her community as a child.

While Mary considers her genre and style to be called "juezzoulockingolk," it's better just to call it "sunshine soul."

The following Tuesday, July 16, ParkFest will feature the music of Jason Coons and Saturday Shoes.