ISP trooper on motorcycle airlifted after I-70 accident

LITTLE POINT -- An accident involving an Indiana State Police trooper on a motorcycle shut down Interstate 70 Sunday evening near State Road 39, about 10 miles east of Cloverdale. 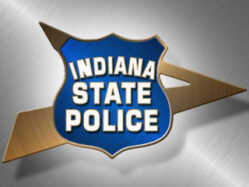 First Sgt. Jon Watson was reportedly recovering Monday at IU-Health Methodist Hospital, Indianapolis, after a crash on I-70 westbound in Morgan County near the Little Point exit.

According to an ISP press release, Trooper Watson was riding his motorcycle east on I-70, just west of State Road 39, when he collided with an SUV.

Watson suffered a serious injury to one of his legs, according to authorities, but he is expected to make a full recovery.

The trooper, has been with the motorcycle division since its inception about 15 years ago, suffered multiple fractures to his leg and severe abrasions.

"They were approaching a construction zone," State Police spokesman Capt. Dave Bursten reported. "Watson and another officer were in the left lane as it was closing. The other vehicle was in the right lane, and for some reason moved from the right lane to the left lane without signaling."

The accident happened near the entrance to a construction zone where signs indicated the left lane was closing approximately a mile ahead.

The driver of the black Suburban passed a sobriety test, but was cited for improper lane movement.

The accident shut down both I-70 eastbound and westbound lanes at the 51-mile marker in order to allow LifeLine emergency helicopter to land safely near the scene, police said.