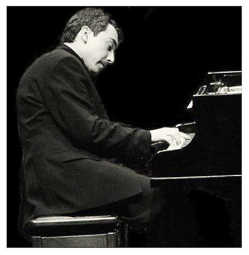 Eugenio Urrutia-Borlando, who as a child prodigy won the Claudio Arrau International Piano Competition in his native Chile and continues to enjoy an international career, will perform Tuesday night at Starbucks in Greencastle and on Wednesday evening in Gobin Memorial United Methodist Church in free events presented by the Greencastle Summer Music Festival.

Tuesday's 8:30 p.m. event is called "Classical Revolution Greencastle" and will include violinist Allison Guest Edberg and cellist Eric Edberg (a DePauw University music professor and founder/director of the festival) and possibly other musicians.

"Eugenio is a regular at Classical Revolution Indianapolis, where I recently played with him and members of the Indianapolis Symphony Orchestra," Edberg added.

Classical Revolution is a kind of "open mic" event, so others are invited to join in at Starbucks.

"We especially want to invite local teenagers and college students to experience how exciting and fun classical music can be," Edberg says, "so we will buy drinks for the first 15 students (college-age or younger) to arrive."

On Wednesday at 7:30 p.m. at Gobin, Urrutia-Borlando will perform J. S. Bach's legendary "Goldberg Variations," one of the most beloved compositions in the history of classical music. The piece consists of an aria (or song), followed by 30 variations and, finally, a repetition of the original melody.

Urrutia made his concert debut with the Orquesta Sinfonica de Concepcion at age 11 and the following year won the Claudio Arrau International Piano Competition and Concurso Jovenes Talentos.

In 2003 Urrutia was featured in Concepcion, Chile, with the National Youth Orchestra of Chile and Maestro Patricio Cobos as part of a national celebration of the centennial birth of Chilean pianist Claudio Arrau.

Urrutia has appeared on radio and television in his native Chile more than a dozen times, and has video-recorded the Liszt B-minor Sonata for the Pencopolitan Project 2010.

An active teacher, Urrutia has given master classes at academic venues and festivals in the U.S. and Chile.

The goal of the Greencastle Summer Music Festival is to bring the community together with friends making music for friends.