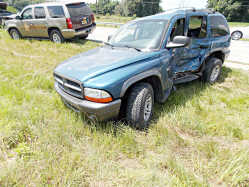 Courtesy of Indiana State Police
Showing significant damage following a Tuesday afternoon crash on U.S. 231, two SUVs await removal from the scene. Amy Jackson of Greencastle, turned left in front of Col. Tom Helmer of the Putnam County Sheriff's Department as the deputy was on his way to a theft in progress.

A Putnam County Sheriff's deputy, responding to a call of a crime in progress, collided with another motorist who turned in front of him Tuesday afternoon.

Shortly before 12:15 p.m., Col. Tom Helmer, 58, of Cloverdale, was southbound on U.S. 231, en route to a call of a theft in progress. Helmer was following another deputy with the lights and siren activated on the 2009 Chevrolet Tahoe.

As Helmer approached County Road 700 South, northbound and southbound motorists had pulled off the road to allow the deputies to pass. As soon as the first deputy passed by, a 2002 Dodge Durango driven by Amy Jackson, 29, of Greencastle, pulled southbound from the shoulder and attempted to make a left turn onto 700 South.

The Helmer and Jackson vehicles then collided.

Indiana State Police, along with several other sheriff's deputies and Putnam County Operation Life, responded to the crash.

and Putnam County emergency agencies responded to the crash.

Jackson was transported to Putnam County Hospital for treatment of back pain. Helmer was treated for a minor hand and arm injury.

Both were treated and released from the hospital.

Jackson was cited for failure to yield to an emergency vehicle and no insurance.

The suspect in the original theft call was apprehended by other responding deputies.