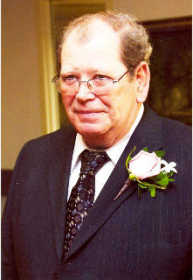 He was born June 22, 1941 in Brazil to Kenneth "Tom" and Thelma Wyndham Hutcheson.

Gerald married his high school sweetheart Amy Long on June 26, 1960. He retired in 1992, after working at Allison Gas Tribune for 32 years. He enjoyed memberships in the Greencastle Jaycees, Greencastle Friendly Squares, UAW Local 993 and after retirement, was a member of the Safety Patrol at the Indianapolis Motor Speedway for 20 years. Gerald enjoyed spending winters in Homosassa, Fla., and summers at home working and playing golf at Oakridge Golf Course.

Funeral services will be held at 2 p.m. on Sunday, July 21 at Hopkins-Rector Funeral Home, Greencastle, with Rev. Paul Taylor officiating. Interment will follow at the Boone-Hutcheson Cemetery.

The family will receive friends from 5-8 p.m. on Saturday, July 20 at the funeral home.

In lieu of flowers, memorial contributions can be made to the Putnam County Foundation in honor of Class of 1959 or a charity of your choice.

Condolences and expressions of sympathy may be shared with the family at www.Hopkins -Rector.com