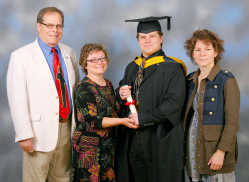 BRAZIL -- The Brazil Concert Band, under the direction of Matthew S. Huber, will present "Keep Calm And March On" at 8 p.m. Sunday, July 28 at Forest Park in Brazil, rain or shine.

The BCB welcomes John Philip Huber, who earned his M.A. in music performance with merit honors recently from the Royal Welsh College of Music and Drama in Cardiff, Wales.

Also appearing will be his friend, Sarah Colbert, BMus, a graduate of Birmingham (England) Conservatoire, performing on bassoon.

John will continue his musical education with a post-graduate degree at Royal Northern College of Music in Manchester, England.

He will perform "La Belle Americaine" by Hartmann on the euphonium and will conduct two British marches, "Wellington March" by Zehle and "Punchinello" by Rimmer.

Janelle R. Huber, in her last appearance with the BCB this year, will conduct "First Suite In E Flat" by Gustav Holst.

The free concert will include "Brighton Beach" by Latham, "Colonel Bogey" by Alford, "Imperial Echoes" by Safroni, "The Royal Welch Fusiliers" by Sousa, "British Eighth" by Elliott and "Folk Song Suite" by Vaughan Williams.