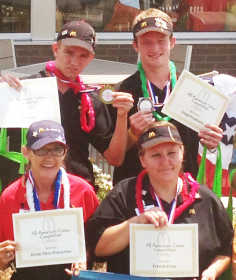 Knowing how to keep their eyes on the fries, the ABCs of adding condiments to the bun and other McDonald's secrets to success has made All-Americans out of three Putnam County residents.

In other words, Golden Arches know-how translated into gold medals for Gaven Shrout and Trevor Troyer of Greencastle and Michelle Stevens of Cloverdale in the McDonald's All-American Crew Competition at Washington, Ind.

The three not only came home with gold medals but also were named to the McDonald's 2013 All-American Team.

"The McDonald's All-American Crew Competition showcases the best of the best of our crew members," said local owner Bob Jedele who has operated the Greencastle store for 18 years. "This competition shows how hard these crew people work and aspire to be the best that they can be at each of their individual positions."

Top performing crew members from 23 McDonald's restaurants across the Wabash Valley earned a spot in the final competition staged July 18. More than 200 competitors were judged on speed, accuracy and service in their respective restaurant positions, such as McCafe or french fry responsibilities.

"They were judged," Greencastle McDonald's manager Paul Jedele explained, "on their knowledge of the food, cook times, making sure things are done procedurally correct, how to interact with customers, speed at their position and knowledge of the business as a whole" among other aspects of life at McDonald's.

Thanks to a clever marketing jingle 40 years ago, everyone knows a Big Mac has two all-beef patties, special sauce, lettuce, cheese, pickles, onions on a sesame-seed bun. But the contest McKnowledge went deeper than that.

For example, "knowing the enemies of oil" was not only important for french fry winner Stevens to understand but also for Troyer, who won the fried products competition (nuggets, fish filet, McChicken, etc.).

"There are six things that can make the oil go bad," Jedele explained, "and they have to know and be aware of those."

Stevens also showed she knows what cooking time makes for the best fries, along with the proper yield (2-, 4- and 6-ounce servings for the different sizes). The latter is not only important for giving the customer what he pays for but curtailing excess product that can adversely affect a store's bottom line.

In Troyer's position, meanwhile, he must walk a crispy tightrope between the critical freshness of product and never making the crew hold on a menu item by being out of nuggets or fish filets when they're needed. 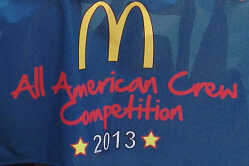 Then there was Shrout, whose expertise as a sandwich initiator -- aka the crew member who puts the bun in the toaster and adds all the ingredients to the toasted result before another member tops it off with the meat -- simply amazed the judges, Jedele said.

Shrout not only has to know the proper build order -- mustard, ketchup, onion, pickle -- in order to send the sandwich on down the line properly. But must do so expeditiously.

"Speed is so important," Jedele said. "We were all watching him and he was going so fast that he was finishing his orders and then taking the orders from the other side of the line and finishing them."

Shrout has been with the Greencastle store for 18 months, while Troyer has worked for McDonald's right at a year. Stevens has been at the Cloverdale restaurant since May of 2012.

Jedele said events like the All-American competition enable the restaurant to do something special for its employees to show appreciation for loyal staff, many of whom are minimum-wage workers.

Overall, the competition "was a huge morale boost for our restaurant," the Greencastle manager said.

"The whole crew cheered and applauded the day they left for the competition and again when they came back with their medals around their neck," he said.

Also representing the Greencastle store at the All-American competition were Liz Ottinger, drive-through presenter, and Emmy Rees, McCafe. They, too, are now wearing distinctive All-American nametags while at work.