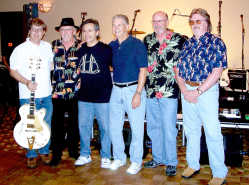 Putting the band back together one more time, the Average House Band will turn back the clock for the seventh straight summer to play two live shows Friday and Saturday, Aug. 9-10.

"We're all getting so old," band member and group spokesman Steve Michael said, "we couldn't remember (whether it was six or seven times), and you can quote me on that."

Regardless of how many times it has been, one thing is for certain. When the group that's perhaps most synonymous with the Greencastle music scene comes home to play, it's a good time and a chance to party like it's 1975.

Joining the group for the third straight year will be keyboard player Marty Baker.

"He's a valuable addition, even though he was not in the original group," Michael said, recalling how he and Baker played in Michael's very first rock band, Me and Them Guys, back in their high school days.

Providing the sound expertise for the show will be Henry Thomas and Mark Meagher of Showtyme Sound.

While Average House Band was a cornerstone of the local music scene for much of the 1970s and 1980s, band members have since migrated to such locations as Florida and California. Yet despite such distances, they all eagerly return for what has become an annual August staple.

The veteran musicians now total something like 250-300 years of performing among them, Michael calculated.

So it's like second nature when these Greencastle Boys of Summer get back together for one musical weekend a year. Is getting back into it really as proverbially simple as riding a bicycle?

"To a certain degree," Michael said. "First of all, it's rock 'n' roll. By and large it's three chords and 12 notes. Hit one bad note, you play it twice and call it jazz."

Average House Band will entertain with rock and roll, blues and country numbers, just like the good old days down at Old Topper Tavern or D. B. Cooper's or elsewhere in Greencastle.

"They've all got a little less hair or it's a little more gray," Michael offered, "but the boys are all revved up and ready to go."

Nowadays, retirement has beckoned Martin, who recently gave up his job as superintendent of a major Northern California apartment complex. Kersey is semi-retired, while Michael is still selling cars, now at a Connersville dealership.

Hamm, meanwhile, owns and operates the NAPA stores in Greencastle and Cloverdale, while Williams remains an adjunct professor at DePauw and a first-class session guitarist.

Average House Band members usually get together on the Thursday night before the annual show for a short rehearsal, mostly just talking through the music that local concertgoers have come to hear all these years.

However, this year at least some of the House Band members plan to get together on Thursday night during the open mike session (it starts at 8:30 p.m.) at the Swizzle Stick.

"We may not all play but there's a good chance some of us will get together," Michael said.

Meanwhile, the Inn at DePauw event will include a cash bar, along with a nightly 50/50 drawing with the profits being donated to the Greencastle High School Alumni Association. Aside from Martin (a Reelsville product) and Badalli (who is from Dyer), the band's members are all GHS graduates.

Meanwhile, both shows will again feature the annual mink coat drawings (faux fur, Michael notes to keep animal activists at bay). Your admission ticket gets you into the raffle.

The Saturday, Aug. 10 performance will be preceded by other local musicians performing on the patio at the inn. Him and Her (Joel and Tosh Everson) will play 1-3 p.m. with Carly Rhine performing 5-6 p.m. and Mary Michael 7-8 p.m.

Michael says he has already taken reservations for the event from Florida, California, Michigan and other locations.

"It's a big weekend," he said of AHB followers who regularly return to town for the concert and a reunion of friends.

For table reservations or more information, persons may contact Michael at 721-3913 or contact him online at smichael@cinergymetro.net.

Some rooms may still be available at the inn, he noted.