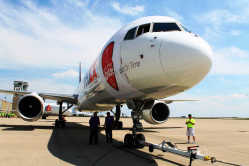 While every IDOC team put forth a valiant effort to pull the 164,000-pound FedEx Boeing 757 across the tarmac, the Putnamville Correctional Facility (PCF) team, The Dark Knight Rises II, had the fastest overall time for the second straight year, pulling the plane 12 feet in just 5.116 seconds.

The Indiana Department of Correction has been a longtime supporter of Special Olympics and the FedEx Plane Pull Challenge.

"It is truly remarkable to see so many of our staff spending their own time to come out and support a great cause and participate in this event," Lemmon said. "The department is proud of our staff, and their continued support for so many organizations like Special Olympics is a testament to their willingness to give back to the community."

"Special Olympics events have the capacity to bring all elements of a community together for a single cause," Furnish said. "However, no group has ever done so much on a single day as the Department of Correction teams that competed in the 2013 Plane Pull Challenge. It shows how one organization can make an amazing difference for some deserving people."

Trademarked as a fundraising event unique to Special Olympics programs throughout the United States, the FedEx Plane Pull Challenge got its start in Indiana in 2002 through the inspiration of FedEx Senior Ramp Tower Controller Eric Garrett, a Special Olympics Indiana volunteer.

After hearing of Special Olympics Virginia's success with its plane pull event, Garrett introduced the idea to Special Olympics Indiana. The Indiana Plane Pull grew from about 15 teams in 2002 to 79 in 2013.

Special Olympics Indiana is a not-for-profit organization that provides year-round sports training and athletic competition in more than 21 Olympic-type sports for children and adults with intellectual disabilities, reaching more than 12,000 athletes across Indiana.