Pilot John Layne doesn't remember much about what happened to him out of the clear blue sky over Huntingburg.

But he has six rods, two metal plates and hundreds of stitches in his 53-year-old body to remind him of that fateful July 19 flight.

The former manager of the Putnam County Airport and one-time pilot for Dixie Chopper, Layne was back in Greencastle Saturday. Less than two months after his near-fatal airplane accident he was visiting the airport for the annual Airport Appreciation Days tradition he helped take off 11 years ago. 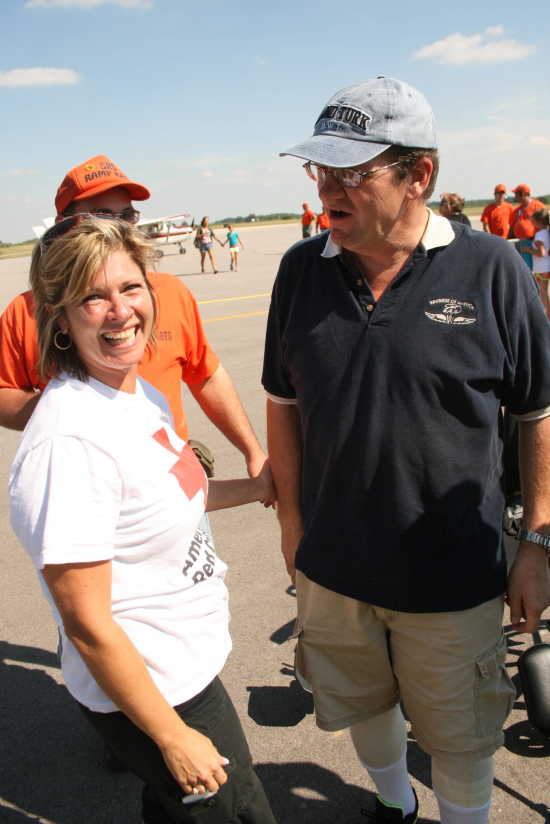 Only this time Layne rolled along the tarmac in a wheelchair, not a Citation Bravo like he used to fly for Dixie Chopper Air. Well-wisher after well-wisher stopped to ask Layne how he was doing. Made him feel like a celebrity.

Easily more John Wayne than John Layne, pilgrim. Cue the whistling pilot from "The High and the Mighty."

Truly though, Layne's is a story all but made for Hollywood. Dramatic stuff.

After all, he coded three separate times en route before getting to the hospital, and his heart stopped for four minutes while he was on the operating table, Layne confided.

Having flown literally hundreds of times without anything remotely resembling a close call, Layne saw his world come crashing down along the shoreline of a Huntingburg Conservation Club lake in Dubois County.

"When you fly, you have 'incidents' now and then," acknowledged Layne, decked out in an Airport Appreciation Days polo shirt and Grand Turk ballcap, "but nothing I would ever say was a close call."

So with that history on his side, Layne took off from the Huntingburg Airport on a sunny southern Indiana July morning.

Piloting an Air Tractor AT-802A, a $1.3 million aircraft, Layne was applying chemicals to a 140-acre field on his first run of the day for Milhon Air Inc. out of Martinsville.

He had two valleys left to treat, Layne recalled, when he "turned into the sun."

Traveling at 161.9 mph and 40 feet above the ground, Layne turned east into that brilliant summer glare, and like Icarus flying too close to the sun, he met his doom, bringing his wings too near a high-tension power line.

"I hit a wire," Layne simplified, explaining the accident that nearly took his life and how a 1-5/8-inch wire flipped the aircraft and sent it spiraling to the earth. 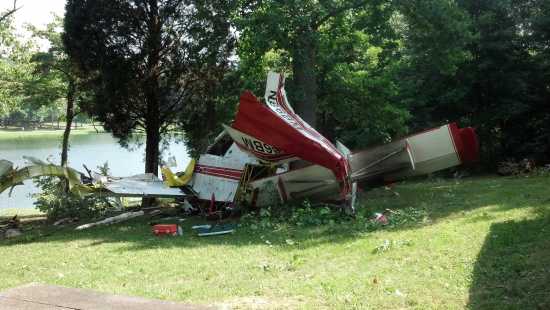 The plane John Layne was flying when it crashed July 19 is little more than a pile of rubble alongside a Huntingburg pond.

He didn't see the wire because of the glare of the sun. Didn't see the utility poles because they were hidden in the tree line. What he did see was the ground, and in a hurry.

But thankfully Layne remembers little of that.

"They said I was conscious," Layne noted, "but I don't even remember spraying any of the field. I remember loading up and taking off, and the next thing I know, I wake up at St. Mary's Hospital in Evansville, Ind., and they tell me I've been involved in a plane crash.

"I can't remember any of it really. I'm not sure I want to remember."

Layne's legs were pinned in the wreckage and he had to be cut out by the Jaws of Life. He still has underlying pain all the time to remind him. But that's to be expected with the number of injuries Layne endured.

Emergency personnel had to put him in a chemical-induced coma to even work on the veteran pilot at the scene.

He broke virtually all his ribs, most of them in the accident, the rest during CPR efforts. There is a plate in his left cheekbone where it was crushed, and another in his shattered left elbow.

Layne said he suffered 25 breaks in his left leg below the knee and four more in his lower right leg. His left femur was broken in two places, including where it connects to the hipbone.

Yet there he was Saturday, able to ascend from his wheelchair to stand and embrace Tracy Maynard of the Airport Appreciation Days group.

"I can always stand to get a hug from a pretty girl," Layne winked, explaining that following the July 19 accident he was admitted to a rehabilitation center on July 27 and was miraculously discharged Aug. 27.

Just days ago he was cleared to put his full weight on his left leg, enabling him to stand and take some baby steps on the long road back.

An outpouring of concern from friends and acquaintances has certainly helped.

"A lot of days when I was first in the hospital, I was getting 100 emails and messages a day," Layne said. "You don't realize how many friends and supporters you have. It's kind of overwhelming, and gives you a whole new appreciation of friendship."

"As soon as possible," he assures, knowing he will need Federal Aviation Administration medical clearance before he does.

Meanwhile, Layne says he's running ahead of schedule on his rehab.

"I'm just working at getting better," he said. "My new career is rehab."

Told that the stitches in his chin remind one of the signature scar of action hero Harrison Ford, Layne smiled.

"Chicks dig stitches," he laughed, able to maintain his sense of humor after such a hard dose of reality.

"I'll tell you what," Layne adds, still able to find the proverbial silver lining in the cloudless sky that was nearly his undoing, "my physical therapist told me I've got a heckuva lot better story than falling in the bathtub at home."

And amazingly, he lives to tell about it.