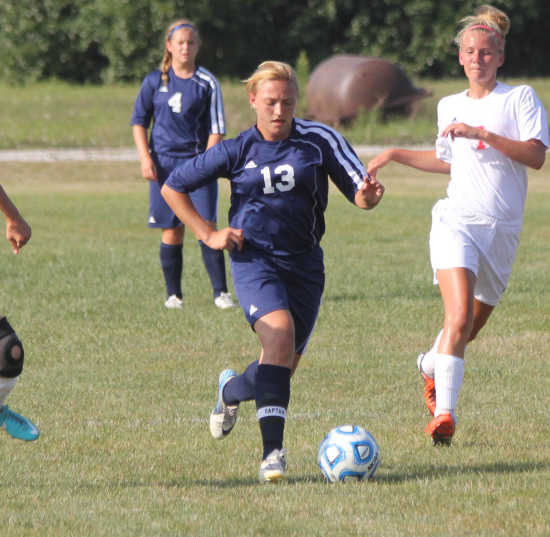 North Putnam senior Rebecca Booth advances the ball up the field during a match earlier this year. Booth had two goals in a win on Thursday. (Banner Graphic/GRANT WIEMAN)

CRAWFORDSVILLE -- The wind was blowing constantly throughout the game but the North Putnam girls' soccer team stepped up to take the match on the road against North Montgomery 5-2.

"(The wind) not only effected our keeper, it effected the entire team out on the field. Reading the ball in who knows how hard this wind was is almost impossible," North Putnam coach Willie Gaskins said.

The first half was much of a stalemate before, with 19:56 left, NPHS senior Rebecca Booth made a great shot across the face of the goal and into the net. The wind moved this shot greatly but it blew the Cougars way.

The defense of the Cougars played very well the entire game but came into a little rough patch late in the first half.

The Chargers scored a goal with just under nine minutes left in the game to tie it at one-all. NMHS scored again a minute later with 7:39 left to take a 2-1 lead.

The offensive game really did not start for the Cougars until after the half when freshman Kaelynn Abner moved up from defense.

Abner can be a game-changer for NPHS. Earlier this year she scored a school-record five goals in one game.

In the second half Gaskins put senior Anna Sims in her place and moved Abner to forward. The move seemed to work as nine minutes into the second half Abner scored the tying goal on a breakaway that she placed perfectly into the net.

"Kaelynn played phenomal tonight," Gaskins said. "I switched Kaelynn because she is my offensive threat. She's a great overall player, she can play anywhere on the field.

"I figured my best bet to tie the the game and get the lead would be to move Kaelynn up front and run with my defense the way it was, and the defense held long enough to get Kaelynn a couple goals and after couple goals its pretty much lights out."

The Cougar defense seemed to play a lot better with Sims on defense and Abner at forward.

"I put Anna Sims in and once I did that the entire team banded together," Gaskins said.

The goal seemed to rejuvenate the Cougars. Abner scored again with 26:09 left in the game. Senior Autumn Wolf got credited with the assist when she made a perfectly-placed pass right to Abner, who put it in to gain the lead 3-2.

Booth got on the board again on a kick that rode the wind and sailed over North Montgomery's goalkeeper's head and into the goal to take a 4-2 lead.

Abner and Booth both had two goals in the game but Abner had a good shot at a hat trick with 9:33 left in the game.

She capitalized, putting it in with her left foot to push the lead to 5-2.

With the way the young offense dominated the second half, it was easy to overlook the defense and goalkeeping for the Cougars.

Sophomore goalie Claire Sims played exceptionally. The ball was unpredictable in the air but Sims still had 14 saves.

"Claire played amazing. Like I said before, trying to judge the ball in this wind when it's kicked is a hard thing to do," Gaskins said.

Abner played, fantastic but she said she could not do it without her teammates.

"I couldn't be more proud to be on this team. We definitely played for each other tonight. We never gave up and fought until the end," Abner said. "I knew my teammates would give me great passes. I was just hoping I could score off of them."