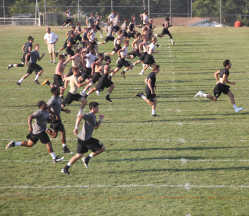 Backs and receivers run gassers during the DePauw football team's practice on Wednesday. The Tigers' hardwork was rewarded with a two-day weekend and a bye week. (Photo by GRANT WIEMAN)

It's not entirely common for a Division III football team to have a scheduled bye week, but that's the opportunity DePauw had this weekend. After a week one loss at Sewanee the Tigers had a chance to work hard in practice, figure out their mistakes, then take the weekend off to recover.

DePauw will be back in action on Saturday when Wittenberg comes to Blackstock for the opening game of the newly-remodeled stadium, but DPU head coach Bill Lynch said he's hoping this gameless weekend will help the young Tigers figure some things out.

"The timing of the off-week I think is very good," he said, "We got a chance to go back and work on some of those things (we didn't do well against Sewanee) before we get into the Wittenberg gameplan."

With no game to prepare for, and no reason to take it easy in practice, DPU had a tough week filled with long practices and gassers -- sideline-to-sideline sprints across the 53-yard wide field.

It wasn't all about working hard, Lynch said. The team also had a chance to get back to practicing and figuring out what it wants to be instead of being forced to prepare for a specific opponent. Sewanee, with a triple-option offense, got DePauw away from its base defense.

"You go for 10 days of doing nothing but practicing for the triple-option and you kind of forget what your defense is all about," Lynch said. "Playing that offense in the opener helped because we had a few extra days to practice for it, and now with a bye we've got a few extra days to get back to how we normally play defense."

The Tigers have many challenges ahead of them. After the Wittenberg game they'll be away for two straight weeks at North Coast Athletic Conference opponents.

The teams should come in ready and focused this week. Lynch gave the players Friday and Saturday off to step away from football for the first time in more than a month. That mental break is another benefit of the early-season bye.

While any week without a game is a good week for some teams, Lynch said he'd prefer to play every Saturday.

"You're always going to turn (a bye) into a positive," he said. "No matter when it comes, it's a positive. But in all honesty, I'd just assume not have a bye.

"Once you get in a routine, just go."

It'll be a set routine the rest of the way. DePauw has a game each Saturday until Nov. 16 when it hosts Wabash in the Monon Bell game. If the rhythm helps lead to wins, there could even be playoffs games after that.