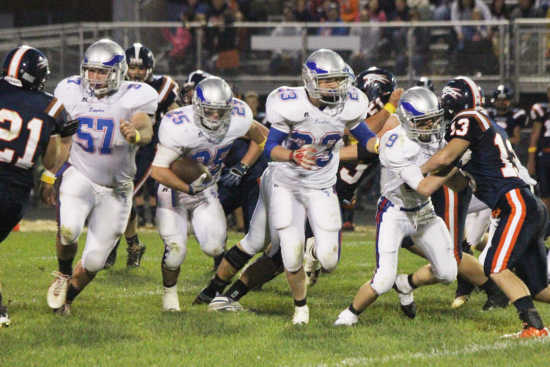 Following blockers Wes Riner (9), Joe Waters (23) and Joey Masters (57) into a hole during a game earlier this season is South Putnam junior Lucas Lorian. Open space was hard to come by last week, just as it will be against Grencastle on Friday. (Banner Graphic/GRANT WIEMAN)

As the final two West Central Conference teams without a WCC loss prepare for Friday's game, the edge appears to lie with Greencastle, the winner of last season's game and undefeated so far this year.

But that 20-0 defeat, and the returning, motivated players on South Putnam brings into this season's contest, has the Eagles believing they're ready.

"We're a year older; hopefully we're a year better," SPHS coach Troy Burgess said. "We're going to have to do our jobs, know our assignments and tackle the football."

Sawyer Arnold drops back in the pocket during a game earlier this year. (Banner Graphic/GRANT WIEMAN)

The Eagles' offense is led by junior running back Lucas Lorian, who with more than 780 yards coming in is one of the leading rushers in the state.

Lorian came into last season's game rolling as well, but the Tiger Cubs held him to just 30 yards on 15 carries.

"They just kicked our tail last year," Burgess said. "They just beat us up. They had a very good defensive game plan and they executed it to perfection."

Every team knows going into a game against South Putnam that the Eagles are going to run, but that doesn't mean they can stop it for 48 minutes.

In last week's game North Putnam loaded the box with eight or nine defenders on nearly every play. While they slowed the Eagles down, the team still finished with 230 rush yards.

It was grueling, but effective. Burgess is hoping for a similar result this week.

"They loaded it up in there, they defended and we just kept grinding."

South Putnam is one of the few teams Greencastle will play this year that can come close to matching the Tiger Cubs' size on the lines, but even that may not be enough.

When Greencastle stopped the running game last year, the Eagles had no plan B. Now, with a senior quarterback in Sawyer Arnold, Burgess said the team will be able to at least make the Tiger Cubs think about spreading their defense out. Arnold was injured during last season's game.

"A lot of it comes down to who can win the line of scrimmage, and least year they beat us. It was no contest," Burgess said. "Last week we were able to spread it out and do some other things.

"Hopefully we're able to do that this Friday. ... Hopefully we can do some things better than we could last year. Is it good enough? I don't know."

The opposite side of the ball will be just as big a test for the Eagles. Greencastle's offense has a dual-threat quarterback, several talented receivers and a bruising tailback.

Senior QB Tyler Scott, who started last season's game against the Eagles, has a full year of experience and has seen what SPHS will throw at him. He can scramble to buy extra time or on designed plays and his passing ability is something most high school teams aren't used to defending.

Senior wide receiver Seth Brown has 465 receiving yards and six touchdowns for the Tiger Cubs, but Scott is also developing a chemistry with the rest of his receivers as well. And running back Alec Pettit has 527 rush yards.

Nobody on either side of the ball will take this week's game lightly. It's a county rivalry, but it may also decide the WCC championship.

"It's a bucket game, it's a conference game and it's a county game," Burgess said. "These kids know each other, there are bragging rights. It's big."