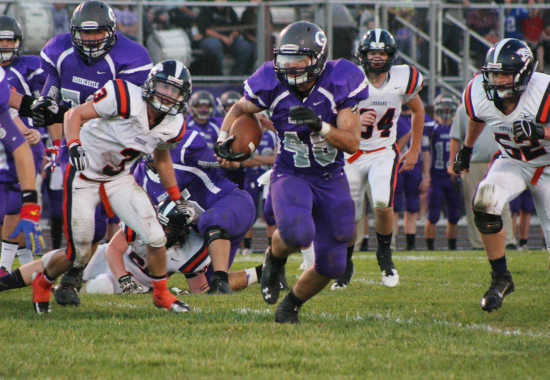 Greencastle senior Alec Pettit cuts around the edge during the second quarter on Friday. Pettit scored three touchdowns for Greencastle, including a fumble return, and finished with 58 rush yards. (Banner Graphic/JARED JERNAGAN)
Order this photo

In what coach Josh Buis called his team's first complete performance of the year, Greencastle forced four turnovers and scored half its touchdowns on defense on the way to a 42-7 homecoming victory over North Putnam on Friday.

Alec Pettit scored three touchdowns -- two running the ball and one on a fumble recovery -- to lead a Tiger Cub attack that scored six touchdowns in 14 minutes of game action.

"I think this is the first complete game we've played," Buis said. "I feel we played well both offensively, defensively and from a special teams standpoint. If we can do that, we're a good football team."

Early on, it was hard to tell the winless team on the year from the one with just one blemish on its record.

Having driven from its own 37 in nine plays, North Putnam was inside the Tiger Cub 10-yard line late in the first quarter when Kaleb Belcher was thrown for a loss and coughed up the football.

Nathan Tesmer pounced on the ball for the Tiger Cubs, their only takeaway that did not turn into instant points.

"It comes down to turnovers again, there's no doubt," Cougar coach Greg Barrett said. "I thought we played a great first quarter -- it's 0-0. Give them four touchdowns in the second quarter, then give them two touchdowns at the start of the third quarter in under four minutes. Those are things that just can't happen."

The first time GHS touched the ball in the second quarter, it was clear they were ready to take charge of this frame. Although a long touchdown pass to Brandon Gierke was called partway back, the offense kept rolling until Pettit rumbled into the endzone from 22 yards out with 8:16 remaining in the quarter.

Nearly five minutes later, it was more of the same from Pettit, this time on a 14-yard run. After a missed PAT, the Tiger Cubs led 13-0.

Seventeen seconds later, Tesmer nabbed his second turnover of the game, this one an interception of Cougar quarterback Gabe McFadden that he returned 18 yards for a score.

After a two-point conversion from Tyler Scott to Gierke, GHS led 21-0.

Regaining possession again just before the half, GHS put an exclamation on the explosive quarter when Scott found fellow senior Seth Brown from five yards out for the fourth touchdown of the second quarter.

GHS led 28-0 at the half, a fact that made Buis happy, considering the distraction of the homecoming festivities.

"I was a little concerned about that because we had a lot of our captains on the homecoming court," Buis said. "So we did a good job of putting up some points in the first half and we were able to let our guys take part in the homecoming activities."

When play resumed, the Tiger Cubs' defense turned it up a notch. On each of the Cougars' first two possessions, GHS forced third downs in which they sacked McFadden and stripped the ball. Each time, a Tiger Cub defender found his was to the end zone.

The first was senior lineman Dustin Williams, who picked the ball up and took about two strides to cover the four yards for the score.

Next it was Pettit, scoring his third TD of the game on a 23-yard fumble return.

GHS ran only one offensive play in the third, a rush for no gain, but it did not seem to matter. The lead was 42-0 heading into the fourth.

In the final quarter, North Putnam eventually found some of the offensive traction it had early on. Aided by a pair of GHS penalties, the Cougars put together a scoring drive of 68 yards, the final 33 coming on a McFadden touchdown pass to Beau Green.

Jordan Sarr added the PAT to close the evening's scoring at 42-7.

"This team hasn't figured out how to win yet," Barrett said. "I mean, they battle. They don't quit. We just kind of self-destruct. Unfortunately, we kind of beat ourselves. I truly believe that.

"Not taking anything away from Greencastle," he continued. "That's a well coached team. But sooner or later we have to look in the mirror and see what we need to do as individuals to correct some of our mistakes. That's something we'll keep doing."

Across the field, Buis said this week was a good experience in seeing how his team dealt with last week's loss to South Putnam.

"It was good to see these guys face a little adversity. This was the first time they've lost in the regular season going back to 2011," Buis said. "So it was nice to see these guys come out tonight and get a win. It was a big event for Greencastle. We had the 1973 team here, the 1988 class reunion here, as well as homecoming, so it's nice to see us get a big win this week after such a tough loss last week."

GHS will try to keep things rolling next week when it hosts Cloverdale at 7 p.m.

The Cougars will return to Roachdale for their homecoming festivities, hosting Monrovia at 7 p.m. 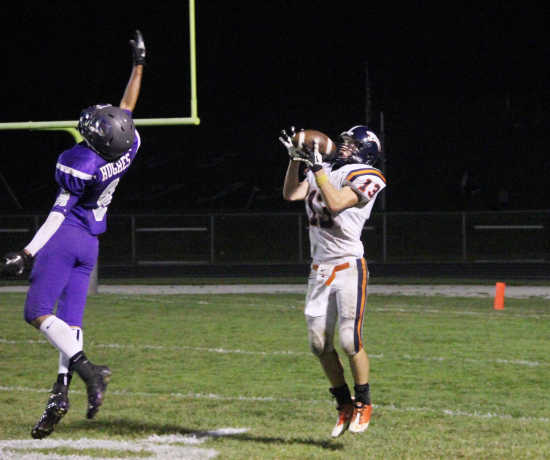