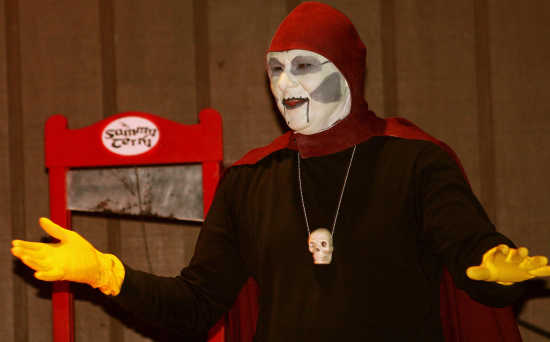 Sammy Terry entertains an enthusiastic crowd of a couple hundred people Saturday evening in the bandshell at Greencastle's Robe-Ann Park.

Old memories were shared and new memories were made Saturday night at Robe-Ann Park as Sammy Terry came to life for a new generation of Hoosiers while ghoulishly reversing the aging process on a legion of older admirers.

More than 40 years since his late father, Bob Carter, graced the old Voncastle Theater stage for a live performance weaved around a spate of horror movies, Mark Carter brought Sammy Terry to the bandshell in the Greencastle park.

He immediately won over both young and old alike.

"How many of you saw Sammy Terry when he was here at the Voncastle," he asked of the performance many remembered as occurring about 1970.

Not too many hands went up in the Robe-Ann Park crowd, split 50-50 among adults and youngsters.

"Oh sure, a few of you," he chided in that characteristically spooky voice the set the tone for so many Friday nights of late-night TV watching for Hoosiers.

"The arms go up slowly with the age and the arthritis," Sammy Terry jokingly added.

Son of Sammy spoke about how gratifying it has been to see the way Hoosiers fondly recall the pale-faced ghoul his father brought to life on WTTV, Channel 4, Indianapolis, beginning in 1962.

Sammy Terry (a name derived from a play on words for cemetery or cem-e-tery) would rise from his coffin late on Friday nights, chortling ominously while introducing B-movie horror flicks and ad-libbing pun-laden banter for commercial-break entertainment.

Dozens of adults fondly told similar stories Saturday, recalling how their parents would let them stay up late that one night a week to watch "Nightmare Theater," as it came to be known.

They talked of positioning bowls of popcorn and cheetos and pouring Pepsis or root beers in preparation of having the daylights scared out of themselves. One enchanting tale even recalled how a young viewer hid behind a bag of Lay's potato chips whenever things got particularly scary on the screen.

But it all was always in good fun, as was Saturday night's stage show.

Mark Carter said he welcomes the notion of "exposing the next generation to horror only Hoosiers could know."

He just never thought he'd be the one to carry on the tradition of the coffin, the cloak and cowl, George the Spider and the dungeon world of Sammy Terry.

"My father came to me about four years ago and asked me to carry on," he said backstage before the show. "I didn't anticipate him ever asking me that.

"But now that my dad has passed (just this past June), it's even more nostalgic for me. It's gratifying to see the effect he had on people and what he meant to them growing up."

The idea of reviving the ghoulish yet lovable character, Carter said, came after he and his dad attended a Sammy Terry exhibit in Brownstown, a town of about 3,000 in southern Indiana.

"About 300 people showed," he said, "which is about 10 percent of the population. That reassured him that there was still quite a following."

Now, at shows like the one at Robe-Ann, he sees grandparents bringing their grandchildren to explain to them, "This is the man who scared grandma when I was your age."

His DVD collection, and a planned 50-year anniversary book with stories and background details untold until now, are other ways a younger audience "will get their opportunity to see how mom and dad lost their continence so many years ago," Carter laughed.

"What's exciting for me," he continued, "is when I get a 50-year-old person standing in front of me, and I can see that look on their face as they begin to turn back to times past with those reel-to-reel eyeballs and they just melt into a kid again.

"That's quite an honor for me," he smiled devilishly. 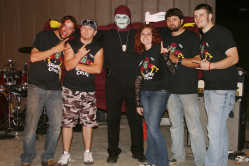 Further proof of Sammy Terry's staying power is that the Indianapolis Children's Museum, beginning Monday (today), will have a recreation of Sammy Terry's dungeon with the original coffin and original George the Spider (which explains their absence from the Robe-Ann Park stage Saturday).

"Very few people have ever been in Sammy Terry's dungeon and made it out alive," Carter assured the crowd at the park.

Carter soon will be making it out to Hollywood where "Creeporia," a comedy-horror film in which Sammy Terry made a cameo appearance, is in post-production. That could lead to a syndicated version of "Nightmare Theater" with Sammy Terry introducing horror films for today's audiences all over the country.

But his heart is still with Hoosiers who have held Sammy Terry close to their hearts for decades.

Carter said he plans on a future "Sammy Terry Nightmare Carnival Tour," recreating the live, day-long shows (such as the one so fondly remembered at the Voncastle) that his dad did every week. Son of Sammy, however, is only planning two such shows a month.

Any such revival, however, won't involve the place it all began, he told the crowd.

"I'm not too happy with Channel 4 right now," he said, saying the new WTTV general manager has ceased all production of local programming, including Sammy Terry's usual Halloween return to the small screen.

"Contact him," Carter urged the gathering. "He seems to be the one who put his thumb on fun."

But it was Sammy Terry who brought the house down and capped the evening with a familiar ghostly refrain.

"I wish each and every one of you many pleasant nightmares," he said in closing the show.