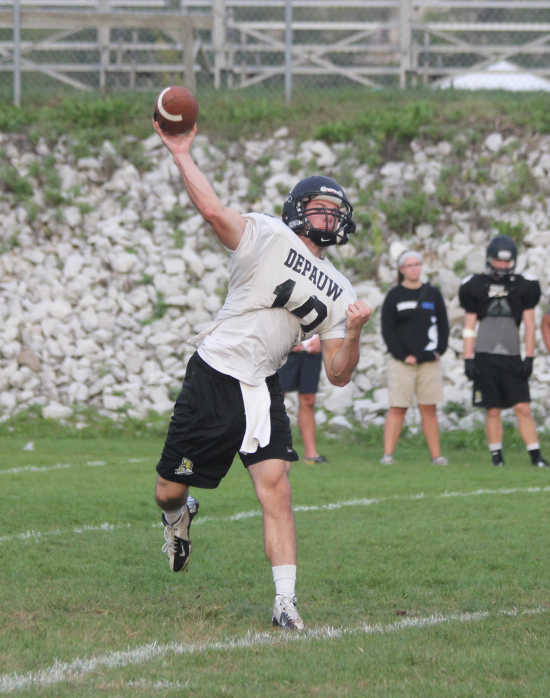 DePauw freshman Matt Hunt fires a pass to the endzone during practice on Wednesday. Hunt will start for the Tigers on Saturday at Denison. (Banner Graphic/GRANT WIEMAN)
Order this photo

Matt Hunt's play at Kenyon on Saturday impressed the DePauw coaching staff so much they were moved to make a change at the top of the depth chart for the most marquee position on the team.

The Tigers' freshman quarterback was 13-for-22 for 223 yards and two touchdowns in the loss and will take over as the team's starter this Saturday when DePauw travels to Denison.

Hunt split snaps with sophomore Justin Murray in the last two games but when he came in to start he second quarter at Kenyon he played his way in to stay.

"It's kind of the direction we're going right now," DPU coach Bill Lynch said. "He had a lot of success early so we just kind of rode him and I thought he played very well. ... He's getting better."

DePauw (0-3, 0-2 NCAC) began training camp with 12 quarterbacks, including seven freshmen. While other flashed signs of potential at various times, it was Hunt who emerged as playing with the most confidence and consistence.

It's no temporary shift for the Tigers.

Rather than moving to the role of No. 2 quarterback, Murray put on the black practice jersey and will transition to linebacker "for the foreseeable future."

"He was a really, really good linebacker in high school," Lynch said. "I think it's something that he's excited about. I think there is real opportunity there.

Murray likely won't see action immediately but the Tigers' defense has struggled in the last two games and if the change sticks he will be an asset going forward this year and next.

Junior Drew Seaman will take over as backup quarterback. He started five games last year and split time with Murray most of the 2012 season, but Seaman has yet to take a snap at quarterback this year.

"Drew is very capable and he's played a lot of football," Lynch said. "I can't say this is definitely what we're doing, but that's the direction we're going right now."

DePauw moved the ball as well last week as it has in any game for the past two season, but Hunt was only part of that.

Senior Nikko Sansone moved from wide receiver to running back before last week's game and was an unstoppable force. He ran for the 103 yards and two touchdowns -- DPU's first 100-yard rusher since week eight last year -- and caught two passes for 65 yards and another score.

"He's played well since he moved to running back full time," Lynch said. "He gives us those explosive plays that we're looking for and he also has the ability as the pass receiver. ... There's going to be a time when -- Armani (Cato) and Amen (Galley) -- we're going to need them but in the game Saturday Nikko was playing well so we stayed with him."

Lynch has talked all year about the need to create plays the pick up big yardage because of how hard it is to sustain drives against college defenses.

Sansone did that last week with two 50-yard touchdowns and the Tigers will need more going forward. They'll also need the defense to step up and limit big plays from the opposition.

That can be helped if the DPU offense stays on the field and limits its third-and-long situations, a focus in practice this week. Improvements are coming, but the team will need to take bigger steps before it can learn how to win.

Hunt led Heritage Christian to a 9-3 record and a trip to the Indiana High School Athletic Association sectional finals last season and DPU might need some of that winning experience.

The Tiger are off to a slow start under Lynch and it won't get easier this week. The Big Red are 3-1 and riding high after getting an overtime win last week at Ohio Wesleyan.

"They've played pretty well," Lynch said. "We can't give up the big plays and the big scores and we've got to make them drive the ball."

Denison beat DePauw 39-20 last year and had no trouble moving the ball in the air and on the ground with its balanced offense.

Junior quarterback Brandon Sklenar has thrown for 753 yards and leads the Big Red with 269 rush yards so far this year. His performance on tape his earned DePauw's respect.

"Their quarterback is dangerous," Lynch said. "He's a good football player. ... He's a real threat and he can do it a lot of different ways."

Stopping Sklenar and the Big Red will take a full team effort, and Lynch thinks his squad is moving in the right direction to do that, even if the scoreboard hasn't shown it.

"I really do believe we're getting better but you're only measured on Saturdays," Lynch said. "It's going to be a good football game. I think our guys have bounced back. ... You only get a chance to play 10 regular season games so each one is so important.

"We're just trying to get better every day.".