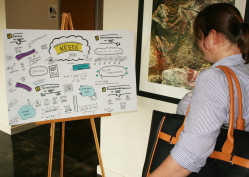 Banner Graphic/ERIC BERNSEE
A collage depicting perceived community needs voiced by participants of the 2013 Greencastle Community Summit piques the interest of Jessie Scott. A local resident who works with the Bonner Scholar program at DePauw University, Scott was one of about four dozen participants in the second phase of the summit at DePauw University's Prindle Institute.

A diverse group of community volunteers continued gazing into their crystal balls Thursday, trying to envision a growing Greencastle in the aftermath of the ongoing Stellar Community project and beyond.

The second phase of the 2013 Greencastle Community Summit unfolded at DePauw University's Janet Prindle Institute, tucked into the southeast side of the Nature Park and presenting a serene, think-tank atmosphere for contemplating what the future may hold locally.

Before the four dozen volunteers returning for Day Two of the summit began addressing issues involving the local economy, the downtown, leadership development and their accompanying social aspects, the group revisited the "spine exercise" of the initial phase.

During the Aug. 15 discussion, the group addressed community potential, issues, needs and expectations.

As Thursday's program began, facilitators Terri Wada and Pamela Napier of Collabo-Creative Inc. reacquainted the group with elements of those four areas of consideration.

For example, Wada noted, three large themes developed from the dialogue about potential and existing community strengths -- people, the city's location and Greencastle's status as a "green city."

People, she said, came out as the community's strongest asset because of the number of individuals offering and sharing creative, innovative and connected abilities.

Location was obvious with Greencastle being centrally located between Indianapolis and Terre Haute, while also within an hour's drive of Bloomington and Lafayette.

"You're not that far from any of these major hubs," Wada said, "but still maintain that small-town feel that seems as though everyone knows each other."

Meanwhile, under potential, the three prime focus areas identified by the group were development of new industry and new retail and further development of existing business.

Turning to issues, the spectrum went from the need to get semi traffic out of the downtown to the lack of a marketing brand for Greencastle.

The community really needs to come up with a really creative brand for itself to set it apart from other areas vying for the same people and same development, it was suggested.

For example, once the Stellar Project reconstruction is complete and downtown facades have been refurbished into welcoming architecture, the desired rebranding might be as simple as "Hey, take a look at us now" or perhaps something evolving from that oft-quoted mantra of "looking to the future while embracing the past."

Regardless, there will always be needs. And Wada broke those needs into people, retail and ideas/aspirations.

Among people, the community looks toward wanting more mentors, entrepreneurs and investors, she said.

Among retail, summit participants pointed to the need for added and more diverse restaurants, retail shops, unique boutiques and even such specifics as a bakery and micro-brewery.

Turning her attention to expectations, Wada brought those into focus with five-year, 10-year and 20-year possibilities.

In the five-year category, the group listed a community center, expanded hospital services (such as reviving the maternity section) and business development with larger food and restaurant options that would include healthy and ethnic choices.

The 10-year range of expectations points to additional retail development and the notion of building the community into an arts and cultural district "as a little entity all its own."

Such a bold approach, it was suggested, could even include an imagined goal like "let's make this the music capital of the U.S."

Looking 20 years out, it was suggested that leadership development could spawn a core of young leaders and improved community relations. Greencastle was foreseen as a "more engaged community," while growing from a green city to a "sustainable city" with walkable and bikeable connecting community corridors.

"It speaks to what it is that the people of Greencastle want," Wada said in recapping Day One of the summit.

"So what now?" she asked as the group broke into four teams to address Day Two issues involving the local economy, the downtown, leadership development and their social implications.

When the smaller groups reassembled for a final assessment of Day Two, Mayor Sue Murray praised the "involvement and engagement of a group of wonderful people of a variety of ages and a variety of backgrounds."

One group, for example, focused its attention on new business development.

Things that emerged from that discussion included:

-- The desire to have more people spending their money in Greencastle and not other areas or online.

-- The availability of more choices and competition.

-- The overall sustainability of the community and its tax base.

-- Job diversity, such as a move to more white-collar jobs that would yield a higher level of wages.

-- The importance of having a 24-hour town where the streets don't get rolled up at 5 o'clock.

Issues addressed in relation to those wants and needs included an assessment of what we already have and what we really need, and how to share those needs and desires with people and businesses who might be willing and/or able to locate somewhere like Greencastle or Putnam County.

"It's like the old chicken-and-egg theory," assessed Rick Bittles of HBG Insurance and Bonds. "We need more jobs, and we need more retail. But we need more rooftops (i.e., population and homes) to support them."

Representatives from Collabo-Creative Inc. are expected to analyze the data collected by Day Two participants and share those findings with the group and the community at a later date.